Balancing and the balance of power, part 1

On Tuesday I posted a quotation from one of Peter Golden’s articles on Central Asian steppe formations. The entry received some interesting commentary, but may have struck some of our readers – particularly those who don’t know me – as a bit odd. How relevant can pre-Cinggisid steppe dynamics be to the more contemporary subject matter of international relations?

This is a first installment in a series of posts that clarify why they matter through a discussion of the current state of theory and evidence about the inevitability of balance-of-power politics.

Realism is, arguably, the most venerable framework for understanding international relations. Aspects of realist thought can be found in the writings of Machiavelli, Guicciardini, Sun Tzu, andThucydides. I’ve already discussed the core claims of realism here at the Duck, but one of the most common arguments found in realist theory is that prudent states ought to pursue balance-of-power politics.

The basic idea is that if a state, or coalition of states, begins to amass enough power to threaten another state’s autonomy, the other state should respond by forming countervailing alliances or developing its own capabilities. I often illustrate this to my classes using the following pictures. They show four states – A, B, C, and D – represented at circles. The bigger the circle, the more powerful the state.

Here are the four states at the start of the process: 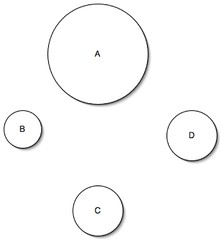 All things being equal (which they never are – more on this later), B,C, and D should respond to A’s power by forming an alliance: 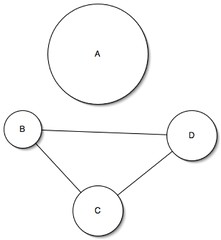 A’s power is checked, the system is in balance.

But let’s say that, over time A’s power declines and C’s is on the upswing, such that the distribution of power between the four states starts to look like this: 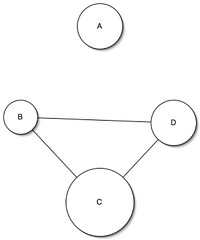 The logic of the balance of power would dictate a shift in alliances, such that A, B, and D would ally against C: 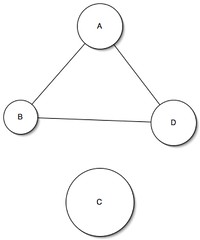 These diagrams only represent balancing alliances – they don’t represent efforts at balancing through developing one’s own military capabilities. A lot of the debate about Chinese military spending pivots around the question of whether China is starting to balance against the US in this fashion, while some argue that its current foreign policy might constitute a kind of “early stage” balancing as well.

This is, more or less, the vision of the balance of power we get in Machiavelli’s and Guicciardini’s discussions of both correct and mistaken policies adopted by Italian rulers during the fifteenth and sixteenth centuries.

it was easy to maintain an alliance contracted in the names of Ferdinand, King of Naples, Giovan Galeazzo, Duke of Milan, and the Republic of Florence in defense of their states. …. The principal aim of the pact was to prevent the Venetians from becoming any more powerful since they were undoubtedly stronger than any of the allies alone, but much weaker than all of them together. … The fact that they [the Venetians] had aspired toward Italian hegemony had been very clearly shown at various times… (The History of Italy, p. 8)

King Louis was brought into Italy by the ambition of the Venetians, who expected by his coming to get control of half the state of Lombardy. …. By taking Lombardy, the king quickly regained the reputation lost by Charles. Genoa yielded, and the Florentines turned friendly; the marquis of Mantua, the duke of Ferrara, the Bentivogli (of Bologna), the countess Forlì, the lords of Faenza, Pesaro… and the people of Lucca, Camerino, Piombino, and Siena all sought him out with professions of friendship. At the point the Venetians began to see the folly of what they had done, since in order to gain for themselves a couple of districts in Italy, they had now made the king [Louis] master of a third of Italy. (The Prince, Book III)

European theorizing about the balance of power picks up markedly in the seventeenth century, but really takes off in the eighteenth.

The Treaty of Utrecht (1713) mentions fears about the impact on the European balance of power if France and Spain were united as a cause of the war – and the prevention of that union as a basis for peace:

“II. That all fears that the Realms of France and Spain might ever be conjoined in one Person shall be allayed, and that the peace herein convened between the two Powers shall be firmly established and the proper balance of forces ever guaranteed and peace thereby ensured, His Catholic Majesty does here reiterate and reaffirm the abdication of all His rights to the Crown of France. Hereto were appended the Act of Abdication, the resolution of the Cortes, the Royal Decree naming the House of Savoy as lawful heirs and successors to the Spanish Throne, the Acts of Renunciation made by the French Royal Family of all Their claims and rights to the Throne of Spain, and the epistle of His Most Christian Majesty.

By the middle of the eighteenth century a similar notion of the balance of power is extremely prevalent in European writings about what we would now call “international affairs.”

A fair number of international relations scholars argue that realist conceptions of the balance of power were relatively consistent until the 1960s and 1970s. In that period, international-relations theorists, influenced by the rise of systemic theorizing in the social sciences (from structural-functional anthropology and sociology to cybernetic theory), really start to talk about “balance-of-power systems” as a way of ordering international politics with its own distinctive logics and processes. The apogee of this trend was Kenneth Waltz’s seminal Theory of International Politics, published in 1979. Waltz’s argument, in essence, is that the anarchical nature of international politics exerts strong pressures on states to adopt policies that, in aggregate, produce recurrent balances of power at the level of the international system. To quote one of my working papers:

The basic contours of structural-realist theory are familiar to most scholars of international relations. Structural realists argue that the international system is anarchical, meaning that no actor has the authority to command obedience from other actors. Anarchical orders, in turn, are governed by principles of self-help. As Waltz argues, “units in the condition of anarchy – be they people, corporations, states or whatever – must rely on the means they can make for themselves.” Since self-help systems require states to place their security before other considerations – whether domestic welfare or the drive for universal domination – states are primed to pay attention to changes in relative capabilities. The only way to ensure survival is to prevent any sate, or coalition of states, from developing the capabilities to subordinate other actors in the system. Thus, actors may seek to counterbalance changes in relative power by expanding their own capabilities (internal balancing) or forming countervailing coalitions (external balancing). Processes of competition and socialization tend to bring actors into conformity with these expectations, because states that fail to pay attention to relative power become marginal to the workings of the system. The net result is that international politics are driven by the balance-of-power mechanism and characterized by the recurrent formation of balancing equilibria.

It would be difficult to understate the influence of structural realism on international-relations theory over the last quarter century. Although only a minority of scholars, including realists, are anything close to being orthodox Waltzians, structural realism profoundly shaped the development of its current mainline rivals: liberalism and constructivism. A lot of seminal constructivist work, for example, is virtually incomprehensible outside of the context of a critique of structural-realist theory.

Although a lot of abuse gets heaped on structural realism, it is actually a pretty compelling and sophisticated theory (Stacie Goddard and I explain why in a recent article). Along with other approaches that stress the balance of power as a fundamental force in international relations, it would seem to have a lot going for it.

As I shall discuss in the next installment, there is a growing body of evidence – or at least a growing number of scholarly writing – that Waltz’s balance-of-power mechanism, and the balance of power more generally, doesn’t deserve a central place in our understanding of the dynamics of world politics.

Filed as: balance of power, balancing, realism, and structural realism

Can you tell the players with a scorecard?