One of the more venerable theories of social unrest focuses on a process of rising expectations and relative deprivation. The basic argument is that individuals and groups won’t resist their conditions if they have grown accustomed to them; people in conditions of abject deprivation, so the theory goes, don’t see much point in trying to change them. In contrast, when they expect their conditions to improve, but those expectations are thwarted, people are more likely to collectively mobilize for change. Statistical variants of the theory focus on what’s called the “J-curve”: riots, rebellions, and other forms of collective violence are supposed to be more common when conditions are generally improving but then decline (see the dotted box in the image below). 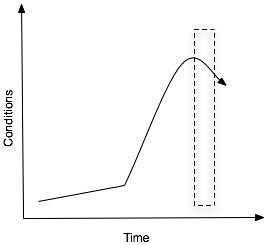 A related set of theories focuses on the social dynamics of reference groups. According to W.G. Runciman (Relative Deprivation and Social Justice; a Study of Attitudes to Social Inequality in Twentieth-Century England. London: Routledge & Kegan Paul, 1966, p. 11),

relative deprivation means that the sense of deprivation is such as to involve a comparison with the imagined situation of some other person or group. This other person or group is the “reference group”, or more accurately the “comparitave reference group”. The addition of “comparitave” is made necessary because “reference group” can be used in two other senses which will not necessarily overlap with the comparitave sense. It can not only mean the group with which a person compares himself; it can also be used to mean either the group from which he derives his standards of comparison or the group from which the comparison is extended and to which he feels that he belongs

Why am I writing about this? This isn’t a post on revolutions, but on Suzanne Nossel’s report on the “National Security in the 21st Century” conference recently held at Princeton.

Suzanne reports on some changes from prior conferences. Among them:

American Unipolarity Waning – Probably the most notable change in the tenor of this meeting from the 2004 session was the universal sense that America’s position in the world has weakened sharply as a result of all the factors we talk about here all the time: Iraq, military over-extension, frayed alliances, lapsed moral authority, plus China’s growing economic power and increasingly effective use of diplomacy and other forms of influence. Whereas a year ago, before the 2004 election, the sense seemed to be that – – depending on who was in the White House – – things might go back to Clinton-era US dominance, the sense now was that the unipolar moment may be at the beginning of its end, and that its unlikely to come back as it once was. [emphasis added]

I wasn’t at the conference, so I can’t comment on the specific substance of these concerns – at least as they were expressed by participants – but it strikes me that not that much has changed since 2004 in terms of America’s position in the world. Perhaps we have a case of rising expectations/relative deprivation.

On the one hand, I wonder if many participants might have hoped – or even basically expected – that Bush would lose the 2004 election. Now that the reality of another four years of the Bush administration has sunk in, they might be experiencing a case of “dashed expectations” – with no hope of the adjustments in American foreign policy they feel would restore America’s waning influence and put its fiscal policy back on a sounder footing.

On the other hand, perhaps, for many of the participants, the reality of underlying changes in the world geopolitical scene is starting to sink in. China’s economy continues to chug along, US military might continues to be eroded by a conflict with no obvious solution, and so on and so forth.

In either case, the “reference” image of the US place in the world a lot of us hold in our heads doesn’t match current trajectories very well. The US is, in many ways, an outsider with respect to current attempts at world-order building, while the ones the US is involved with seem to be going nowhere fast. American military might seems incapable of quashing the Iraqi insurgency. Americans want to be loved, and there’s a distinct shortage of international goodwill. Katrina further undermined our own confidence in, and foreign perception of, American might.

Yet having sat in on many similar “brain trust” discussions of the future of American foreign policy and grand strategy, I’ve lost all confidence in any projections. There are, in my view, too many sources of uncertainty about the developing shape of world politics. While there are strong indications, for example, of a power shift towards East Asia, I still remember predictions of American decline (and Japanese ascent) in the 1980s.

Which brings me back to the subject of revolutions and collective violence. Some time ago the American Journal of Sociology ran their own version of the “why did we miss the end of the Cold War” self-searching that many social scientific fields were going through. Timur Kun wrote an article for the forum, entitled “The Inevitability of Future Revolutionary Surprises” (100,6 [May, 1995], pp. 1528-1551). Kun’s argument was that citizens misrepresent their preferences, which makes it difficult to know, ex ante, when they are ready to rebel. In the same forum, Charles Tilly wrote a piece in the same forum (“To Explain Political Process,” 100,6 [May, 1995], pp. 1594-1610) in which he questioned the whole enterprise of looking for invariant laws of revolutionary (and other large-scale) social processes. Tilly emphasized the contingent configuration of mechanisms and processes in particular outcomes – a stance reminiscent of Weber’s concept of “singular causal analysis” (link is to a PDF; see also here).

Tilly’s own view is that there is broad room for generalization, but that we have to be very careful about extrapolating “invariant” rules from past instances. This is the problem we face in projecting global dynamics into the future. That doesn’t mean we shouldn’t do it, but we also need to guard against extrapolating too much – either from recent trends or from past processes. In that sense, the pessimism of the conference is neither warranted nor misplaced. The future contains inevitable surprises.