Typolgoies of collective violence against civilians

Chris Bertram received some flack, apparently, for describing the recent Birmingham race riot as a “pogrom.” Today he gets to enjoy a qualified (and somewhat angsty) last laugh:

But I see that both the conservative columnist Theodore Dalrymple and the Observer’s Nick Cohen have also noticed the echoes. Dalrymple wrote:

The rumour that a 14-year-old black girl had been caught shoplifting by a Pakistani shopkeeper in the Lozells area of Birmingham, and subsequently raped in revenge by a score of his compatriots, is highly reminiscent of the blood libels that used to sweep through Tsarist Russia at the end of the 19th century and led to vicious pogroms.

…. Thoughts that are outrageous on Crooked Timber on Monday, are conservative talking-points by Wednesday and the conventional wisdom of the “decent” left by the following Sunday. Maybe I should be worried about that!

The offensiveness of, in particular, Dalrymple’s article notwithstanding, I don’t get why anyone criticized Bertram in the first place. Indeed, in my semi-annual class on “genocide and mass violence” I routinely propose a typology that includes pogroms: 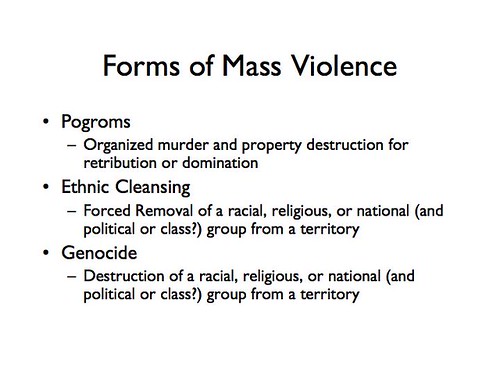 Admittedly, this is simply an introductory set of categories (complete with a grammatical error, I see). They are designed to provide a baseline for discussion questions such as: “how would we describe violence against blacks during and after Reconstruction?”, “are pogroms a necessary component of ethnic cleansing?”, “is genocide actually a subset of ethnic cleansing?

“, and that sort of thing. I never imagined it might have been controversial. Certainly, none of my students ever voiced objections.

Now the debate over the “uniqueness” of the Holocaust? That’s another matter entirely…

We can’t seem to get this reputation thing down

The lies that lead to war