Iraq by the Numbers

As I sat down to write this post I paused for a moment and thought, “do we really need another Iraq post?” This was a very sincere thought. Rodger and Dan have done a good job discussing the politics surrounding the Iraq conflict. I have written a number of posts regarding my own view of the war’s rationale and how it fits in to a broader grand strategy*. And we never want for new developments covered in the media—whether its controversy over yellow cake, brutal character assassination in the House, or the ongoing struggle to reach a political settlement. In short, we are inundated with stories and discussions on the Iraq War.

However, I do believe there is more to discuss. Specifically, I think it would pay to take a step back and see just how well the war is going on the ground from a pure (if there is such a thing) military perspective. We hear conflicting stories, especially regarding progress (or the lack there of) and the make-up of the insurgency. So I thought I would take a look at the numbers and see what picture emerges.

The analysis that follows is based upon a wonderful service provided by the Brookings Institution called the Iraq Index1. It is updated every Tuesday and Thursday and includes data on military, political, economic, and public opinion matters in Iraq. I have found this a great resource and highly recommend it.

One way we might get a picture of military progress is by looking at how many troops are getting killed per month. If we are making progress against the insurgents we should expect less troop deaths as we a) kill/capture more insurgents and b) get better at preventing/avoiding attacks by insurgents. So how are we doing?

In terms of total troop deaths per month things seem to be getting worse. The graph below illustrates a disturbing trend–the rate of troop deaths per month seems to be increasing (per the trend line). The large blips represent offensive operations by the US (such as Fallujah). However, the general trend does not bode well. 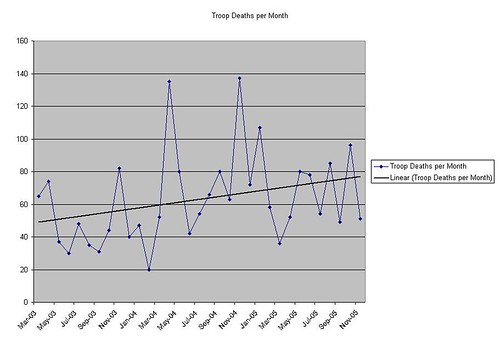 We can also look at how the insurgents are fighting. Not surprisingly, since the end of major operations the insurgents have concentrated on indirect attacks (IEDs [Improvised Explosive Device] and Car Bombs) and less on direct fire tactics. The good news story is that troops are dying less from direct fire attacks. However, as the trend lines indicate, we are loosing an ever increasing number of troops from indirect attacks. This is neither unsurprising nor encouraging. Recent research has shown that 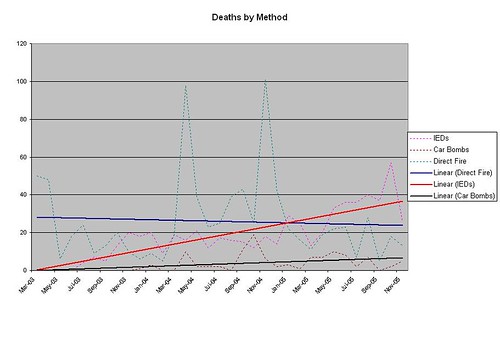 in asymmetric conflicts, powerful actors are at a disadvantage when the weaker power utilizes an indirect strategy2. Insurgents have become increasing effective at using IEDs and car bombs, both of which troops in a policing capacity are increasingly susceptible to.

If we look at the number of insurgents killed/captured we do see an overall upward trend (although month-to-month figures are characterized by wild swings). The problem with this is that we have actually seen an increase in the number of attacks per month with the numbers 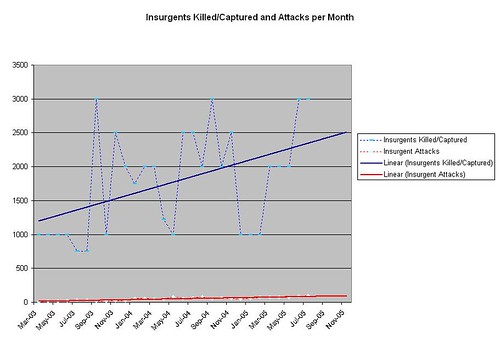 trending upwards as well. Given these numbers it is hard to say the insurgency is slowing down.

However, there is some good news. In terms of number of Iraqi Military/Police forces killed monthly the number has been decreasing.

There does seem to be some degree of increased security for Iraqi personnel which is a good thing, although the data isn’t complete enough to necessarily draw a confident trendline. But the numbers look encouraging. However, there is some bad news. In terms of total Iraqi security forces the total is now about 211,000 which is only 60,000 less than the stated goal. The only problem is only about 32,000 of those 211,000 are at a level 1 or 2 readiness. This number has barely budged since last spring. For those who don’t know, here are the definitions of each readiness level:

As you can see, most forces are still in the level 3 phase, meaning an immediate pull out of US troops would not leave Iraqi forces in a favorable position to carry on the fight against insurgents.

Make up of the Insurgency

A brief word about the make-up of the insurgency.

Contra claims by some that the insurgency is “in its last throes”, official estimates have placed the total size of the threat between 15-20,000 since May 2004 until October 2005. That estimate has been steady. Furthermore, the number of foreign fighters that account for the total has been placed between 700-2000. I must admit I found this number suprisingly low. While I never bought the official line that a) the insurgents were mostly foreign jihadis or b) we are fighting them there so we don’t have to fight them here (the infamous flypaper theory), this number is still lower than what I expected. The data seems, at a minimum, to cause serious doubts about the flypaper theory.

Overall the numbers do not demonstrate a hopeless situation from a military perspective, but they do not fill one with much optimism either. Iraqi forces are dying less and their numbers are increasing. However the number of Iraqi forces actually prepared to take over for coalition forces is still only at about 11% of necessary estimates. It appears our forces are taking losses at a higher rate and we are increasingly fighting against an insurgency that is utilizing strategies that we are not well equipped to combat (although most qualitative estimates note that US forces have been getting better at counter-insurgency/policing ops while on the ground). Additionally, the make-up of the insurgency indicates a strong indigenous character and, given the politial stakes, that means numbers and intensity are likely to decrease, at least in the short term.

In the future I plan to update the anaylsis here as new data becomes available. Certainly the data is rough and the analysis did not entail complex statistical methods. So take it with a grain of salt. Additionally, we need to also look at the other indicators that reflect economic and political progress on the ground and I plan to include that analysis in a later post. In the meantime, head over to Brookings and take a look at the Index for yourselves. Regardles of how we may feel about the rationale(s) for the war it pays to get an accurate picture of how the conflict is going since the most important debates in the near term will focus on questions of progress.

————-
*For a quick collection of posts by Duck members related to Iraq see here.

1The analysis that follows owes a great debt to conversations with my collegue Daryl Press, including introducing me to the Iraq Index. However, he is not responsible for what follows.

2See How the Weak Win Wars : A Theory of Asymmetric Conflict (2005)