Confusing headline of the day 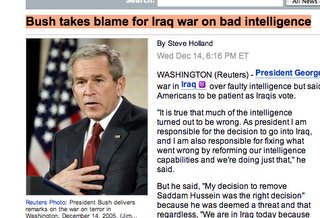 Turns out, none of the above:

But nothing in this statement – or any other ones I’ve been able to find from his Fox News interview – suggests that he’s taking any real blame for the gross inaccuracies his administration used to justify the war.

My head has just exploded