The Voice of God? 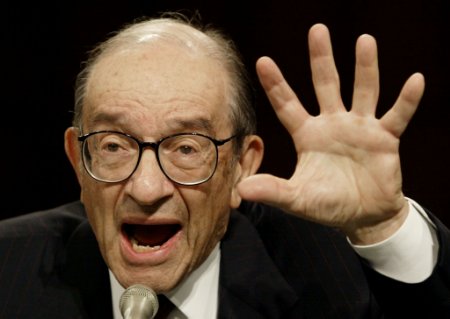 Anyone who reads my posts by now knows that I have an acute interest in the effect that information, uncertainty, and signaling plays in politics and social life. One thing that becomes immediately clear to anyone who looks into those topics is that, at least in the realm of international politics, reliable information is difficult to find. Reliable signals (or, in Robert Jervis’ words, indices–signals that are reliable because they are thought hard or impossible to manipulate) are hard to come by given the incentives to bluff that exist. It is rare that international actors come to agree upon reliable, conventional indicators of information. However, it would appear that Alan Greenspan, recently departed head of the Federal Reserve, remains such an indice for financial markets even though he no longer has the ability to alter Fed policy.

The front page of the Financial Times this morning reported that comments by Greenspan, made at a private speaking engagement for bankers and clients of Lehman Brothers, contributed to a modest rise in the dollar and a fall in Treasury prices. Why?

The remarks…were seen as relatively hawkish on the US interest rate outlook.

According to one person at the dinner, he made upbeat comments on the short-term outlook for the US, while noting the uncertainty over the housing market’s slowdown.

“By 7.30am, two people [from Lehman] had called us,” said Anthony Karydakis, chief fixed income strategist at JPMorgan Asset Management, who did not attend the dinner. “Greenspan qualified his remarks in a number of ways, but people tried to keep only the soundbites.”

Mr Greenspan, according to the dinner guest, also said there was plenty of liquidity in global markets and that the low level of long-term interest rates may have muted the impact of the Fed’s rate increases since June 2004. He also spoke of the dangers to the US and global economies of a rise in protectionism.

It would appear that when Greenspan speaks, international financial markets still listen. Even though he no longer exercises formal control over the Federal Reserve’s policies, financial actors seem to believe that he remains one of the few firm indices out there. Of course, this may simply be the result of the short period of time that has elapsed since his departure. Greenspan might still have some insider knowledge as to the Fed’s thinking. However, I think it is more than that (and of course, time will tell if I am right).

Over the course of Greenpsan’s career his thoughts on such matters became a conventionalized indice of how markets would appear in the future. Whether he was revealing insight into the policies he would prescribe or because he could simply see the future more clearly than his contemporaries, financial actors took Greenspan’s words as a sort of ‘gospel’. The voice of God is thought to reveal unadulterated truth, since the gap between what is spoken and what is is nonexistent. One doesn’t have to worry about whether the signal is reliable–it is the ultimate indice. Apparently, when you manage to find such a signal (or indice) it is hard to ignore it, regardless of whether it emanates from inside the Federal Reserve or a private global investment bank.

The Politics of Eulogies

The Gang That Couldn’t Shoot Straight