Do as I say, and, apparently, as I do

After having previously vowed to speak candidly with Chinese President Hu Jintao about affording more political and social freedom to Chinese citizens, President Bush managed to miss a golden opportunity and let diplomatic nicety get in the way.

Most should by now be aware of the vocal protester who shouted at Chinese President Hu Jintao and President Bush during the welcoming ceremony at the White House today. The women apparently acquired a press pass and from her location on top of a camera stand began shouting “President Bush, stop him from killing…President Bush, stop him from persecuting the Falun Gong”. The woman was quickly apprehend and ushered away by members of the Secret Service. The story pretty much turns my stomach from there.

Bush leaned over to President Hu and whispered “You’re OK”, prodding Hu to continue his remarks. Later, according to Dan Wilder, acting senior director for Asian affairs at the NSA, Bush told Hu that the incident “was unfortunate and I’m sorry it happened”.

To make the story more ridiculous, the woman has been charged with disorderly conduct and possibly an additional charge of intimidating or disrupting foreign officials. The picture below shows the protestor being escorted away by a secret service agent with the agent’s hand covering her mouth. Just the message I am sure we wanted to send President Hu–when citizens protest unjust policies they should be stifled, charged with a crime, and those who previously touted the virtues of freedom of speech and political expression will apologize for it. 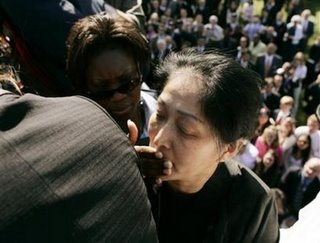 “What Hu Talking About Mr. President?”