Ruth Marcus writes about Ted Kennedy as people on the Hill know him: a Senator who pursues bipartisan compromise in the spirit of actually legislating for the common good.

Look, there’s Ted Kennedy, shoulder-to-shoulder with John McCain, Republican presidential front-runner, just after the collapse of the immigration deal the pair had brokered. And there he is, again, right behind a beaming Mitt Romney — Kennedy’s ’94 Senate opponent, Massachusetts governor and, yes, 2008 Republican presidential wannabe — as Romney signs a health care bill.

What, you may ask, is wrong with these pictures? The icon of Democratic liberalism, the Republicans’ favorite fundraising device (just mention “Teddy” and a torrent of direct-mail dollars gushes forth) — what’s he up to — consorting with the opposition and helping its presidential prospects?

The answer is that he’s up to nothing more than Kennedy business as usual. In the public consciousness, Kennedy’s persona may be that of the unflinching liberal warrior, champion of government-based solutions and red-faced berator of Republican nominees. And he is, when that’s called for (and, at times, when it’s not).

But this Kennedy caricature is misleading because it is incomplete. Into his fifth decade in the Senate, he is a dogged, pragmatic practitioner of the legislative arts. Kennedy-McCain on immigration, Kennedy-Romney on health care (the Massachusetts senator worked behind the scenes to get the necessary federal go-ahead and also as an emissary to hostile state Democrats leery of giving Romney a big win) — these aren’t aberrations but simply the most recent examples of Kennedy cross-party collaboration.

Which raises the most interesting and unexpected question about Ted Kennedy: Is he a political dinosaur? Not in the usual way that issue comes up — that his brand of unabashed liberalism is outmoded in a “big government is over” age — but in the sense of whether Kennedy-style legislating is outmoded in an age of smackdown partisan politics. In short, unlikely as this sounds: Is Ted Kennedy a starry-eyed naif?

These are, if not in those exact words, awfully close to the current Washington whispers. He doesn’t understand the way things work these days , you’ll hear. You can’t cooperate with these guys the way he’s used to doing. You work with them and they’ll just roll you in conference, or trot out the 30-second spots against you. Or both.

It didn’t take long for at least one conservative blogger to rant about, in this case, how Kennedy invented mean-spirited partisanship at the Robert Bork hearings (sadly, I’m not kidding). It should also come as no surprise that some conservative bloggers think that highly original “blood alcohol” jokes constitute a ‘refutation’ of Marcus’ description of Kennedy’s legislative activities.

At least The Bullwinkle Blog’s post–“when all else fails, lie”–makes use of some actual argumentation:

Kennedy has’t crossed any lines here, Romney has and he didn’t have far to go. He’s always been borderline conservative anyway so it’s not surprising that he’d come down in Kennedy’s camp on this one. Second, and most important, is that Kennedy’s work with two RINOS is nothing more than pandering to the center, he has been on the edge of scaring centrist Democrats for years and every so often he extends a hand to reassure them that he hasn’t become Fidel, not yet!

Kennedy, of course, has a much longer history of working with Republicans on legislation. Consider, for example, the title of his 1996 health-care achievement, Kennedy-Kassebaum, which many,many people I know have benefited from.

A similar article by Eleanor Clift generated pretty much the same kind of ill-informed vitriol.

Why, you might wonder, am I blogging about this? I’m obviously not part of the ‘Kennedy wing’ of the Democratic party, and the Duck is an international-relations/baseball/geek-stuff blog. Well, my father worked for Ted Kennedy for over twenty years. I’m sure rabid conservatives will dismiss my comments as “biased,” but I have a pretty good idea of how Kennedy’s office worked on legislation and interacted with Republicans, and I can vouch for the accuracy of the positive aspects of Marcus’ portrayal.

Indeed, I’m immensely proud of my father, who now works for AvaMed. I think the pictures below- from his retirement party–reflect the bipartisan nature of much of Kennedy’s legislative work. At the very least, I now have an excuse to post them. 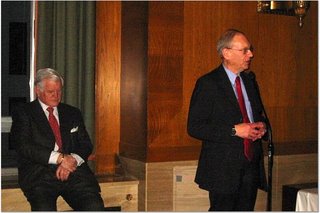 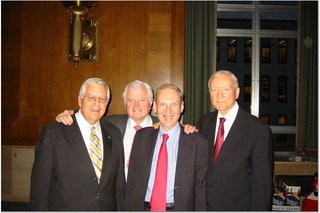 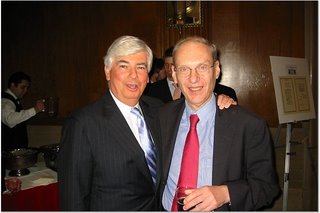 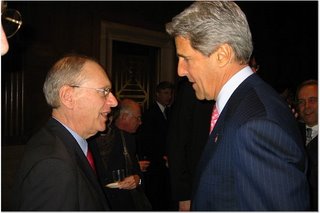