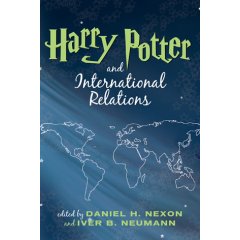 A box of copies of Harry Potter and International Relations just arrived at my house.

According to the people the publisher asked to endorse the book, it’s a good read:

“Nexon and Neumann explore an underdeveloped area of Harry Potter scholarship in a collection of essays covering a wide range of political and cultural topics. In a post-9/11world, international relations is a critical area of inquiry. Their book is a valuable contribution to the growing body of scholarly attention to the boy wizard and the magician who created him.”—Lana Whited, Ferrum College

“This accessible and original volume will challenge both Harry Potter fans and students of world politics to think more deeply and critically about different forms of engagement between popular culture and world politics. Drawing on “enjoyable evidence” from the Harry Potter universe, this diverse yet coherent collection of essays draws on one of western culture’s quintessential commercial mega-texts to demonstrate that our understanding of world politics can be significantly and agreeably expanded by delving into the riches of popular culture.”—Jutta Weldes, University of Bristol

Amazon has it in stock, but Powells doesn’t as of today. I co-edited the volume. Our own Patrick Jackson contributed to it as well. I think it is a pretty engaging book, and we all had a lot of fun working on it. The chapters are quite diverse, ranging from analysis of the politics surrounding Harry Potter to the “mega-text” itself. It definitely isn’t a typical academic international-relations volume, so I heartily recommend that our readers buy a copy. If enough people to do, I might be able to use my share of the profits to, um, buy a pizza. 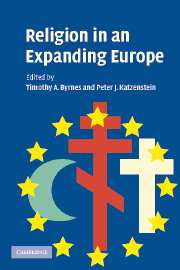 I should also take the moment to shamelessly self-promote a more conventional book I contributed to. When we first met at the conference that produced Religion in an Expanding Europe, edited by Tim Byrnes and Peter Katzenstein, in the spring of 2004, I’m not sure I grasped the significance of the project. The book includes chapters on Islam, Orthodoxy, Catholicism, and Protestantism. My own contribution places European religious politics in historical context, with somewhat pessimistic conclusions.* It is also the first conference I went to where the arguments got pretty intense; in this case, one of the major points of contention concerned how to assess the aims of Turkish political Islamicism.

“With political controversies raging over issues such as the wearing of headscarves in schools and the mention of Christianity in the European Constitution, religious issues are of growing importance in European politics. In this volume, Byrnes and Katzenstein analyze the effect that enlargement to countries with different and stronger religious traditions may have on the EU as a whole, and in particular on its homogeneity and assumed secular nature. Looking through the lens of the transnational religious communities of Catholicism, Orthodoxy and Islam, they argue that religious factors are stumbling blocks rather than stepping stones toward the further integration of Europe. All three religious traditions are advancing notions of European identity and European union that differ substantially from how the European integration process is generally understood by political leaders and scholars. This volume makes an important addition to the fields of European politics, political sociology, and the sociology of religion.”

Available at Amazon and Powells (where it appears to be $10 above list price, go figure).

*I also make a major historical error concerning the terms of the Peace of Westphalia. It did not reaffirm the principles of Augsburg. I must have been tired and rushed, because everything else I’ve written before or since has gotten it right. Well, that’s life.

Two sides to every story