Mark Safranski kindly forwarded me a link to a really interesting blog, Cynical Nerd’s The Indian National Interest. The most recent post (as of today) is entitled “India, Russia and Geopolitics.” The conclusions:

While India might move closer to the United States due to a convergence of threat perceptions, the continued ambivalence of the latter towards Indian interests vis-a-vis Pakistan, not to mention United States efforts to cap India’s nuclear capacity, leaves India with no option but to retain links with Russia as a strategic insurance in the fast shifting sands of geo-politics.

Russia conversely views India in purely commercial terms i.e the need to modernize its petroleum sector, sustain its defence production facilities and benefit from software, biotechnology and pharmaceutical know-how. A combination of strategic and commercial imperatives, rather than ideology, ensures Russia’s continued relevance to India.

Despite my desire for closer US-Indian relations–and my own uncertainty about whether the US is serious about attempting to “cap” Indian nuclear capability in any way that would harm India’s deterrent capabilities–I have to admit that the underlying argument here makes sense. Consider a simplified, and highly stylized, representation of a world in which India’s primary strategic partnership is with the United States. 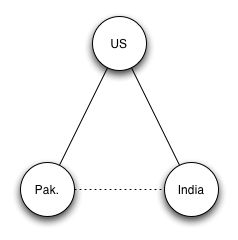 The United States occupies a brokerage position in this relationship; in consequence, it enjoys asymmetric influence over both India and Pakistan. It can, if it chooses, play them off against one another. It can tilt towards one or the other as its needs dictate, and there isn’t a lot India and Pakistan can do about it in the absence of alternative strategic partners who might substitute for whatever assets they receive from the US. 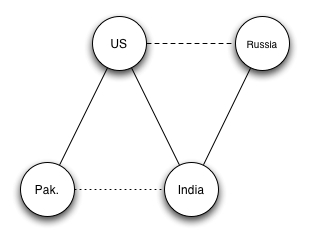 Now compare an equally simplified world in which India also pursues a strategic partnership with Russia. India now occupies a very different structural position, one that gives it greater freedom to maneuver and even allows it to potentially serve as a broker between Russia and the United States.

Indeed, second-tier powers (and those below them) often find that triangulation better serves their interest than building relations of dependency with other states.

Filed as: India, geostrategy and Pakistan

Three things can happen; two are bad and the good one is far from certain