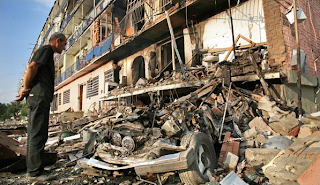 Dan lamented correctly yesterday morning about the paucity of reliable casualty numbers for the conflict in Georgia. Seems this is still the case, with the Washington Post reporting today that “no… casualty figures could be independently confirmed” in an article nonetheless subtitled “Civilian Deaths on Increase In Conflict Over S. Ossetia.”

But it’s actually rather important to try to figure out whether civilians are being targeted, and how many are being killed by either side, since the battle now being waged is as much for the moral high ground as for territory. Both Georgia and Russia are justifying their actions as “protection of civilians,” and both are accusing the other of atrocities. Sorting out who is killing who how and how fast may provide clues as to how humanitarian motivations may have played into recent events, if at all; and how they may complicate efforts at conflict resolution.

RUSSIA
* Russian Ambassador to Georgia Vyacheslav Kovalenko said at least 2,000 civilians had died in Tskhinvali as a result of fighting between Russian and Georgian forces, Interfax news agency reported. He said 13 Russian peacekeepers were killed and up to 70 injured in the fighting.
* Sergei Sobyanin, the Russian government chief of staff, said 30,000 South Ossetian refugees had fled to Russia since early on Friday.
GEORGIA
* A source in the Georgian government told Reuters on Saturday 129 Georgian civilians and military were killed and 748 wounded.
* Georgian President Mikheil Saakashvili said Russian aerial bombing had killed around 30 Georgian soldiers.
SOUTH OSSETIA
* South Ossetia’s President Eduard Kokoity on Friday said about 1,400 people had died in Tskinvali.
UNHCR
* The U.N. Refugee Agency said the number of people who have fled from South Ossetia into Georgia proper is about 2,400.
* The UNHCR, quoting Russian officials, says the number estimated to be going to North Ossetia, an adjacent region within Russia, stands at 4,000 or 5,000.

One thing that’s to be noted is that UNHCR’s estimates of refugee flows into N. Ossetia fall considerably below Russia’s claims. It’s reasonable to expect that

Beyond UNHCR, who was already in the region dealing with 275,000 existing IDPs, agencies that track war dead more systematically aren’t releasing numbers yet, but a number of them have reported on or issued warnings about the humanitarian situation through ReliefWeb: Human Rights Watch urges all parties to the conflict to refrain from attacking civilians outright – so far, no reports of massacres, just destruction of civilian infrastructure and collateral damage. International Crisis Group calls for an immediate end to hostilities, citing the humanitarian consequences of a wider regional conflagration. Which suggests to me that the direct impacts on civilians are relatively limited at present and that the greatest immediate risks will come from lack of water and shelter among the displaced rather than direct targeting: many civilians have already been evacuated from areas under siege, but now face deprivation and exposure. (At least it’s not mid-winter, yet.)

Meanwhile, the International Committee of the Red Cross issued calls yesterday for the parties to facilitate humanitarian access. Unclear as of now whether this constitutes an accusation that either side is so far denying access, or whether it’s just a plea for logistical assistance. As of this morning, UNHCR reports that humanitarian corridors are being established.

The US takes a hard line at the UNSC