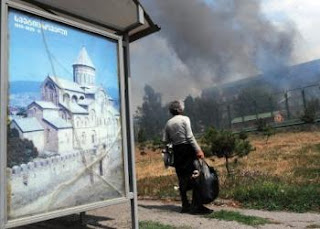 [This post includes a quick roundup of events and ends with some analysis; see also Rob Farley’s morning summary of developments]

Georgia has now declared a “state of war.” This seems appropriate, as Russian bombs fall on communications, economic, and military targets throughout Georgia and Russian ground and naval forces advance. Bloomberg:

Ships of Russia’s Black Sea Fleet moved toward Abkhazia, another separatist region, and Russian jets are crossing the border every 15 minutes and attacking military and civilian targets in as many as six locations simultaneously, he said. Russia’s actions amounted to “full-scale war,” Lomaia said.

Russian tanks pushed into South Ossetia and, by morning today, reinforcements backed by bombers and artillery had forced Georgian units out of the South Ossetian capital, Tskhinvali, the Defense Ministry said on its Web site. ….

Russian warplanes bombed sites including the port of Poti and a military base at Senaki, in the west of the country, Georgian officials said. The town of Gori, the birthplace of late Soviet dictator Joseph Stalin, was also hit.

The Abkhazians are also seizing the opportunity to flush out Georgian troops.”

He said that Abkhazia had to act because it has a friendship treaty with South Ossetia.

Shamba said Abkhazian forces intended to push Georgian forces out of the Kodori Gorge. The northern part of the gorge is the only area of Abkhazia that has remained under Georgian government control.

Georgia’s Security Council secretary Alexander Lomaia said that Georgian administrative buildings in the Kodori Gorge were bombed, but he blamed the attack on Russia.

Although no one has any good idea of the death toll in the conflict, it is clearly rising.

The Georgians, perhaps starting to recognize the degree of their miscalculation, are calling for a cease fire. Meanwhile, Bush and Putin have met in Beijing to discuss the conflict; and countries from all over the world (including Iran) are calling on both parties to cease fighting.

Georgia now wants to bring all of its forces back from Iraq and, as Fester predicted, has asked the US to help with the effort. The US has agreed to do so.

Ingo Mannteufel of Deutsche Welle does a good job of describing the intense propaganda war surrounding the conflict. For an example, the Armenian News Agency reports:

Gaining the maps of Georgian military, Russian peacekeepers got evidence that military operation in South Ossetia was not abrupt. The attack was planned scrupulously.

This afternoon, units of the 58th army freed Tskhinvali. Battles are going on along the responsibility zone of the Russian peacekeeping contingent, land forces commander Vladimir Boldyrev said.

Wounded are being evacuated. Special forces are sent to Tskhinvali. Landing and assault battalions of the 76 Pskov division entered the South Ossetian capital, Vesti reports.

Recall that Armenia is a Russian client state.

Doug Merrill reports that the situation in Tbilisi remains mostly normal; Wu Wei is trying to get out, and not succeeding.

A few points of analysis.

I don’t think there can be any doubt at this point that the Russians were well-prepared for a Georgian offensive [But see Stefan’s discussion of typical Russian troop levels in the region]. What remains obscure is whether their quick and overwhelming response demonstrates that the Kremlin was trying to provoke Georgia into providing them with a pretext to attack, or because they operated on the reasonable assumption that they needed to be ready in the event of a Georgian offensive against one of the breakaway regions.

For other discussion of this issue, see my earlier posts on the conflict (I should note that it now looks like Saakashvili did not say that Georgia was taking advantage of the Olympics, but that the South Ossetians were).

On this question, I received an interesting email from a source–with some expertise on Russia and the region–who wishes to remain anonymous.

Thoughts on the Georgia situation:

1. Russia was ready for this. They had lots of equipment in place and ready to go. And the response was swift and decisive. Saakashvili was probably counting on the fact that a) Putin is out of the country; and b) Russian officialdom tends to vacate to their dachas for the month of August, with the idea that the Russian response would be slow and disorganized. This seems profoundly stupid, given the tit-for-tat provocations over the last several weeks and the recent war games Russia conducted in the region, but Saakashvili’s intelligence has so far left me unimpressed.

2. Medvedev gets to look strong and in charge. Since Putin is out of the country, Medvedev is on his own in the Security Council and in making speeches (at least to the domestic audience). A convenient little war (2nd Chechnya War) did a lot to boost Putin’s popularity when he first became president. Can they be hoping that this war will do the same for Medvedev? Medvedev’s popularity has been slipping, and a substantial number of poll-respondents don’t think he’s really in charge (a number that has gone up over the last couple months). Throw a little war presidency into the mix, though, and the situation may look a bit different.

3. If Russia did indeed lay out bait for Georgia, they must be pleasantly surprised by the results–Georgia not only took the bait, but did so in a way that makes the Russian response look like it occurred on a not totally flimsy pretext. Georgia launched an organized, planned ground assault. Russia gets to respond not on the basis of the harassment or death of a couple of civilians with Russian citizenship, but to an all-out invasion.

4. This is not going to end well for Georgia. Russia has expanded its targets beyond the vicinity of South Ossetia, hitting not only military but also economic and communications targets throughout Georgia. It is unlikely, though, that Russia intends to set up a puppet government as they did in Chechnya–the local population is far too hostile, and I doubt that they have any reliable local elites that they can turn to. More likely, we will see a clear demand for independence for both Abkhazia and South Ossetia (though I suspect that shortly after obtaining independence, S. Ossetia would petition to rejoin the motherland, which Russia would, of course, graciously grant

According to the Bloomberg report I quoted earlier, Russian Foreign Minister Sergei Lavrov has demanded that Georgia sign a non-aggression pact with South Ossetia. If the Russians will really accept that, this might be Georgia’s least-bad way out.

Finally, Henry reminds us all (in comments) not to forget the connection between renewed assertiveness by, on the one hand, the breakaway regions and the Russians and, on the other hand, Kosovo independence. He’s right, of course. They’re are multiple layers of motivation at work, and the analytic question pivots on how they configured to produce the current conflict.

Rob Farley works his way through the Georgia-Russia quagmire