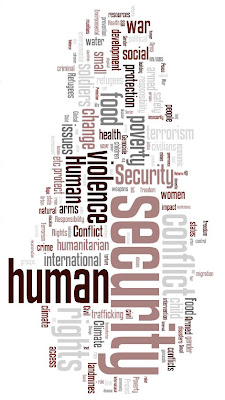 What you are looking at is Wordle‘s representation of 282 survey answers to the following question: “Name three or more specific issues that come to your mind when you think of human security today. An issue means something that human security specialists are actively concerned about.”

The survey was disseminated this summer to 6,000 individuals who subscribe to mailing lists of “hubs” in the human security network such as the Liu Institute, as part of an ongoing NSF-funded research project on agenda-setting within transnational networks.

This is an interesting first stab at developing an empirical answer to a question that is often debated by political scientists in the abstract: what is human security? Instead of trying to define it on a normative basis, we are attempting to measure what the term actually conveys to participants in the “human security network.” Then, we can start analyzing variation in salience among the various issues to answer the question: why do some issues end up on the human security agenda and others don’t?

We (my collaborators and I) haven’t begun coding the answers or triangulating them with interview data from activists in the global South (who were underrepresented in the online survey), but in the meantime the Wordle representation is, well, just very pretty to look at.

If I were an Obama media consultant….

Midway through the Democratic Convention