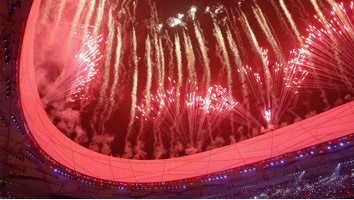 The 2008 Summer Olympic games kicked off today in Beijing, on the same day as Russia and Georgia go to war. Correlation? Causation?

John Hoberman’s “Think Again” article in the most recent issue of Foreign Policy would have us believe that the Olympics are not only irrelevant to, but actually bad for world order and international cooperation:

“The real genius of the IOC is its ability to create and sustain the myth that it promotes peace. In reality… trapped by its grandiose goal of embracing the entire ‘human family’ at whatever cost, the IOC has repeatedly caved in and awarded the games to police states bent on staging spectacular festivals that serve only to reinforce their own authority.”

I am no expert on the IOC’s history or on any large-N studies that may or may not confirm Hoberman’s claim that the Olympics have a negative or at best zero effect on the frequency or intensity of interstate war. But I am able to see an important conceptual problem in Hoberman’s argument: he treats “internal human rights” as synonymous with “interstate peace.” For example, the first sentence of his abstract begins with the foil: “The Olympic Games were founded to bridge cultural divides and promote peace.” But the article primarily refers to the internal human rights abuses of certain Olympic-hosting states as evidence that this goal has not been met by the IOC. Hoberman derides the IOC’s official policy of political neutrality and Olympic diplomacy as an “old cliche”:

“What the Olympics promote instead is a form of amoral universalism in which all countries are entitled to take part in the games no matter how barbaric their leaders may be.”

But it is precisely this amoral universalism that has the capacity to promote peace – among, not within, countries. It is no different from the political neutrality espoused by humanitarian organizations who, like the IOC, lack coercive instruments and instead peddle universal norms; or by the United Nations, an organization founded on the sovereign equality of states moreso than on a commitment to clean up their internal politics. In fact, the tension between these two noble goals – international stability between states, and human rights within them – underlies many of the key debates about UN reform today. Hoberman treats these two goals as if they are the same and can be conflated, when in fact, achieving one often depends on undermining the other.

Do the Olympics promote human rights? I’ll buy his argument that they can legitimize offending governments. But does the IOC claim to be a human rights organization? No. Its avowed goal of “acting as a catalyst for collaboration between all members of the Olympic Family” does in fact, perhaps, sometimes depend on looking the other way when it comes to internal repression by governments who think of themselves as family members.

Rob Farley works his way through the Georgia-Russia quagmire