War in the Caucasus: not whether, but how long and among whom 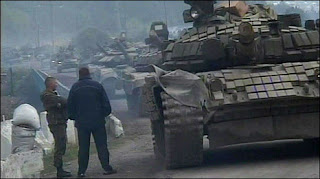 Over a year ago MG wrote: “if you want to put money on a hot war somewhere in the near-abroad, I’d advise you to give considerably more attention to relations between Russia and Georgia.”

After the Georgian attack on South Ossetia, Georgia and Russia are at, or already over, the precipice.

Anne Barnard and Andrew Kramer of The New York Times:

Russia sent troops rolling into South Ossetia on Friday, after Georgian troops attacked the capital of the breakaway enclave and shot at Russian planes, in a sharp escalation of the conflict.

Georgian officials said their military had fired on Russian planes — one unconfirmed report said two Russian planes had been shot down — and that their aircraft had bombed a convoy of Russian tanks that moved into South Ossetia, the pro-Russian enclave that has enjoyed de facto autonomy from Georgia since 2004. A local Russian official said the convoy was not tanks, but humanitarian.

As Georgian forces besieged Tskhinvali, the capital of the enclave, President Dmitri A. Medvedev of Russia promised to “punish” those responsible for what he called “a deep violation of international law” by Georgia that he said had led to the deaths of Russian citizens and Russian peacekeepers stationed in Tskhinvali.

“I am obligated to defend the lives and dignity of Russian citizens, wherever they are located,” he said in an address carried on Russian state television. “We will not allow the unpunished killing of our fellow citizens. Those who are guilty will suffer the punishment they deserve.”

The Georgians are appealing to the United States for help:

Georgia today called on the US to step in after Russian tanks rolled across the border to aid separatists in the breakaway region of South Ossetia.

The Georgian president, Mikhail Saakashvili, said it was in US interests to help his “freedom-loving” nation.

In an interview with CNN, he said: “Russia is fighting a war with us in our own territory.

“It’s not about Georgia any more. It’s about America, its values. We are a freedom-loving nation that is right now under attack.”
South Ossetia map

His plea came during a three-hour ceasefire in heavy bombardment of the South Ossetian capital, Tskhinvali, by Georgian forces.

At least 10 Russian peacekeepers have been killed and 30 injured. Fifteen civilians have died.

Russian forces invaded the regional capital, Tskhinvali, and bombed a military airbase outside the Georgian capital, Tbilisi, after the president, Dmitry Medvedev, said it was his duty to punish those responsible for Russian deaths.

Earlier, Saakashvili said 150 Russian tanks and armoured vehicles had entered the region and that his forces had shot down two Russian planes over Georgian territory.

The story is developing too fast right now for good analysis, but a few thoughts:

1. This is a very dangerous situation. A United States client is now involved in military clashes with the Russians.

2. Many observers (including those of us at the Duck) focused on Abkhazia. But South Ossetia, where the Russians were much less firmly entrenched, makes marginally more sense as a target for the Georgians.

3. It seems difficult to believe that the timing of the Georgian offensive–i.e., coinciding with the opening of the Olympics–was a complete accident. But the evolution of this conflict, which began with small exchanges, suggests at least some chance that the timing is a coincidence. If it isn’t, the question becomes: what did the Georgians think they had to gain by launching their offensive now? [UPDATE: apparently Saakashvili has condeded that the timing wasn’t accidental, and that Georgia was trying to take advantage of the start of the Olympics.]

4. The Georgian move comes after about a month of supportive rhetoric from the west. During her visit to Georgia, Secretary Rice expressed disapproval of Russian actions in the Caucuses:

Russia, which backs the separatist governments in both regions, has accused Georgia of being behind a deadly cafe bomb in Abkhazia and clashes with South Ossetian separatists.

The Russian foreign ministry said on Wednesday that: “Tbilisi’s actions represent a real threat to peace and security… capable of taking the region to the brink of a new armed conflict with unpredictable consequences.”

But Ms Rice said before her arrival in Georgia that Russia had made “a number of moves… that in fact have not been helpful in terms of the frozen conflicts there”.

5. Only yesterday it looked like Georgia was having second thoughts about a direct confrontation.

Russia is concerned about developments in Tskhinvali and really wants to deescalate tensions in the Georgian-Ossetian conflict zone, Georgian State Minister for Reintegration Teimuraz Yabokashvili stated in an interview on Georgian Rustavi 2 television. “Today Russia is as concerned about what is happening in Tskhinvali as everybody else,” Yakobashvili said. “I believe that Russia is no being deceptive and really wants to deescalate the situation.”
The Georgian minister continued that “The separatist regime is acting independently,” worrying Russia that the situation in the conflict zone is getting out of control. “Separatists authorities are trying to save the [South Ossetian President Eduard] Kokoity regime,” Yakobashvili said. He confirmed that Russian special ambassador Yury Popov will arrive in Tbilisi on August 7, and they will travel together to Tskhinvali for talks with Deputy Prime Minister of South Ossetia Boris Chochiev. The talks will be held outside the Mixed Control Commission format, Yakobashvili emphasized.

But now it appears that this amounted to a clumsy attempt by the Georgians to isolate the South Ossetians from the Russians. If so, launching the offensive after offering a cease fire to the South Ossetians might not have been such a good idea. So just what kinds of calculations are driving Saakashvili’s decision-making process?

UPDATE: Nathan Hodge reminds us that US material support for Georgia might also have emboldened them (h/t Rob Farley):

Leaving aside the question of Russian interference (see below), the larger concern has been that Georgia might be tempted to use its newfound military prowess to resolve domestic conflicts by force.

As Sergei Shamba, the foreign affairs minister of Abkhazia, told me in 2006: “The Georgians are euphoric because they have been equipped, trained, that they have gained military experience in Iraq. It feeds this revanchist mood… How can South Ossetia be demilitarized, when all of Georgia is bristling with weaponry, and it’s only an hour’s ride by tank from Tbilisi to Tskhinvali?”

One of the U.S. military trainers put it to me a bit more bluntly. “We’re giving them the knife,” he said. “Will they use it?”

Saakashvili: Georgia and Russia at war