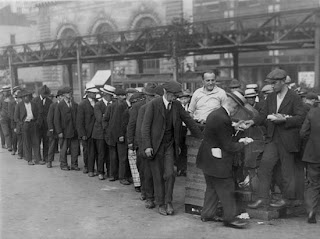 After the start of the Great Depression, the US government adopted a number of regulations, institutions, and safety-net policies designed to prevent a recurrence of an event that nearly destroyed capitalism and liberal democracy.

In the 1980s and 1990s, many of those regulations, institutions, and safety-net policies were eliminated or curtailed. Some call this the triumph of capitalism and freedom over excessive government regulations, others call it “the great risk shift.”

Now, I’m not saying any of this is directly responsible for the fact that our financial system is teetering on the edge of total collapse at the same time that an enormous number of people are one paycheck away from poverty.

But it certainly is food for thought.

Oh, wait. Look! Over there! A pig with lipstick is attacking some lobbyists!

… What was I talking about, anyway?

PS: Oh, yeah. The financial crisis. My wife made an interesting point last night: “The government’s basically said that Lehman Brothers is below the threshold for being ‘too big and important to fail.’ So if you were a stockholder or creditor at an investment bank–or any other financial institution–that was smaller than Lehman, and you got a hint that it was in trouble, what would you do?'”