Bestir Yourselves, Ye Councils of Nations, and Smartly

International Talk Like a Pirate Day ends at midnight, and once again pirate lovers around the world are gleefully splicing the mainbrace with their mateys and poking fun at the bilge rats who don’t get that it’s, well, Talk Like a Pirate Day. (Pirate Dictionary here for the uninitiated; a superior and more scholarly resource is George Choundas’ A Pirate Primer.)

While that’s all in good fun, the time seems right to remind ourselves that maritime piracy is resurgent globally (the International Maritime Bureau reported rates of four attacks per week in April) and that it represents a scourge, not something to be romanticized. Also an interesting case for those interested in how the international community attempts to solve its common pool resource problems, like how to secure the lawless seas.

Some news stories to this effect from just the past week or so:

Piracy is particularly notorious off the coast of Somalia, where ocean-going robbers are not only threatening the lives of seafarers in a geopolitically important shipping lane, but have been looting aid intended to stem the humanitarian catastrophe in the Horn of Africa. 55 vessels have been attacked this year; 11 were being held hostage simultaneously last week alone.

After rescuing several of its own nationals held hostage earlier this week, France has recently called for “a global effort” to combat piracy; but what is meant by this is not clear: a global effort or an effort globally? The International Shipping Association’s Round Table joined this call today, but it seems they want a global effort to protect specific shipping lanes, demanding:

“real and immediate action against brazen acts of piracy, kidnapping and armed robbery, carried out with increasing frequency against ships in the Gulf of Aden, by pirates based in Somalia.”

My two pieces of eight: 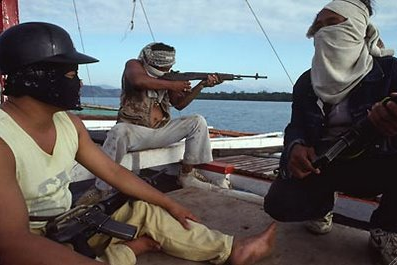 1) The effort needs to occur globally and not focus piecemeal on patching together regional regimes to protect specific shipping lanes. Piracy hotspots move. Four years ago the Straits of Malacca were the most dangerous shipping lanes in the world, but a coordination regime between Indonesia, Malasia and Singapore reduced the incidence markedly. It has been during the same period, however, that pirate attacks in the Horn of Africa have increased as maritime marauders have sought a more lawless region to ply their trade. And Somalia is not the only hotspot today; piracy remains a problem around in South Asia and off the coast of Nigeria, in particular.

2) The efforts need to be global (that is multilateral) but that doesn’t mean the UN is the right body to do the work, as shippers claim. The UN has no global police force, and was designed to prevent territorial aggression among middle powers, not solve transnational security threats. In fact the Charter regime is part of the problem: ships on the high seas cannot legally pursue pirate boats into the territorial waters of sovereign countries; and some littoral states are ill-equipped to themselves police their shorelines. On a case by case basis, the UN Security Council can authorize exceptions to this rule, but this approach hasn’t worked well in Somalia, partly because governments also need to be required to actually do the policing. As TFS Magnum writes: “It seems just ridiculous to think the UN will solve this problem.” But governments acting together on this specific issue can. Malaysia, Indonesia and Singapore have already shown that to be the case, at least in the Straits of Malacca. Given that, there’s little excuse for failing to take this seriously. Diodotus points out that an alternative forum for a discussion of new rule-sets might be next year’s World Oceans Conference.

3) Meantime, in Somalia, if Western powers want to solve the immediate problem, they might consider recognizing Puntland and Somaliland as legitimate political entities, which will strengthen their ability to bring rule of law to the region; and addressing the sources of the pirates’ legitimacy within Somalia itself. For more on both these arguments, see here.