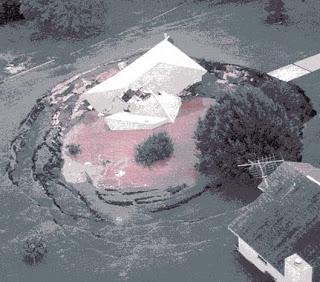 If you’re on the internets right now, you know that the US government has just effectively nationalized AIG. It seems that the risk of a total meltdown of the global economy outweighed concerns about moral hazard.

Correspondents say AIG’s demise would have a far greater impact on the world’s financial markets than Lehman’s.

Many banks and investment funds in the US and around the world would lose their insurance cover at a time when defaults on payments are likely to rise.

Treasury Secretary Henry Paulson and Ben Bernanke, the chairman of the central bank, the Federal Reserve, met senior members of Congress late on Tuesday to brief them on the bailout.

The plan calls for the government to seize up to 80% of AIG and remove its management, similar to the way it took control of mortgage giants Fannie Mae and Freddie Mac.

US President George W Bush welcomed the package, and the White House said the deal was made “in the interest of promoting stability in financial markets and limiting damage to the broader economy”.

As the New York Times notes:

The Fed said the loan would allow A.I.G. to sell “certain of its businesses in an orderly manner, with the least possible disruption to the overall economy.”

Without help from the Fed, A.I.G. might have been forced to liquidate real estate and other assets at fire sale prices — a move that could drive property prices lower and force countless other companies to mark down the value of their own holdings.

I’m neither an economist nor a political economist, and I don’t play one on this blog. But I will say a few things:

1. This is truly incredible. There’s no silver lining in sight. We will be very lucky to muddle through the current crisis.

2. I am very pleased that all of my investments are long-term in character.

3. Every right-wing blogger and commentator just got their license to call Obama a “socialist” revoked.

4. It would have been nice if the Federal Government hadn’t passed the last eight years spending money like a drunken sailor and cutting taxes like Freddie Krueger hopped up on crystal meth. If the United States was a medieval kingdom, we’d have replaced all the silver in our coins with painted wood shavings by now.