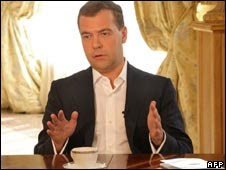 There’s been a fair amount of reporting on an interview that Medvedev gave to German ARD, in which he talked about seeking “constructive dialogue” with the European Union. He also laid out “five principles” of Russian foreign policy, including opposition to unipolarity and a defense of sphere of influence… most notably, Russia’s.

Paul Reynolds of the BBC provides a cynical analysis:

Those therefore are the stated principles. What implications do they have?

To take them in the order he presented them:

The primacy of International Law: This on the face of it sounds encouraging. But Russia signed up to Security Council resolution 1808 in April this year, which reaffirmed “the commitment of all Member States to the sovereignty, independence and territorial integrity of Georgia… ” – and has since abandoned that position.

It argues that a Georgian attack on South Ossetia on 7/8 August invalidated its commitment and required that it defend its citizens there. But it perhaps cannot proclaim its faith in international law and at the same time take unilateral action.

This principle therefore has to be seen as rather vague.

The world is multi-polar: This means that Russia will not accept the primacy of the United States (or a combination of the US and its allies) in determining world policy. It will require that its own interests are taken into account.

The Russian Foreign Minister Sergei Lavrov hinted at what this really means. “There is a feeling that Nato again needs frontline states to justify its existence,” he said in a speech. He was putting down another marker against the extension of Nato membership to Ukraine and Georgia.

Russia does not seek confrontation: Again this sounds hopeful but it based on the requirement that Russia’s needs are met first. If the world agrees to its demands, then it is happy to be friends. But if not… therein lies the warning.

Protecting its citizens: The key phrase here is “wherever they are”. This was the basis on which Russia went to war in South Ossetia and it contains within it the potential for future interventions – over Crimea, for example, populated by a majority Russian-background population yet owned by Ukraine only since 1954. If Ukraine looked set to join Nato, would Russia claim the protection of its “citizens” there?

Privileged interests: In this principle President Medvedev was getting down to the heart of the matter. Russia is demanding its own spheres of influence, especially, but not only, over states on its borders. This has the potential for further conflict if those “interests” are ignored.

However we read the significance of such statement, it is clear that (1) Medvedev has articulated a classical realpolitik vision, albeit it one tempered somewhat his invocation of rules and norms of international conduct. I also think recent statements from the Kremlin suggests its awareness of the growing danger that the conflict with Georgia has greatly undermined Russia’s international position, even if, as Nicholas Kulish reports, many Germans, consider the “Caucasus… a distant concern, if they believe they concern them at all.”

But Medvedev’s statements call attention to a more analytic question. Is this, as a number of prominent scholars in my field would argue, merely more evidence of “rhetorical balancing?” Or can we now start to talk about balancing dynamics in the current international system?

The strong do what they will…