Before they disappear into the ether 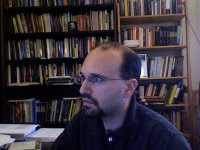 I’ve been fairly prolific lately. This state of affairs stems, in part, from what I’ve been working on for the last couple days: copy editing page proofs, which amounts to one of the dullest things I’ve done in furtherance of my career. Ever.

Moreover, as I’m sure is the case for at least some of our readers, my mind has been colonized by two pressing developments: the final innings of the 2008 US Presidential campaign and the potential collapse of the neoliberal economic order. Both are doing their part to tap into my “outrage” receptors, and blogging seems to be the only effective way to prevent total overload.

But all of this has not been without cost.

As I ramp up production of short posts of varrying quality, I push some excellent work by the rest of the Duck crew towards the internet ether’s edge. I’ve also neglected to mention some important developments related to my more usual topics. So, without further to do, here are just a few posts at the Duck that, if you’ve missed, you should check out. I’ll even throw in an article or so that I was going to blog about but didn’t (or, at least, haven’t yet).

1. Peter’s “Barak Obama and the Renewal of American Hegemony.”

Now, onto articles external to the Duck…

1. NATO will now target opium production in Afghanistan. On the one hand, they need to do something. The Taleban extract large rents from the trade. On the other hand, this kind of interdiction has a lousy track record. It might make more sense to just buy up the crop at market price, and thereby cut the Taleban out.

2. Joshua Foust has a great post on the Shindand Bombing. Go read it.

3. Fred Weir of The Christian Science Monitor has an interesting piece on the fallout of Russia’s military showing in Georgia. Although the Russians crushed the Georgians, they’re not particularly happy about their performance.

“Russia has changed a lot lately, and the spirit in the country is different from what it used to be,” says Lt. Gen. (Ret) Gennady Yevstasyev, a senior adviser to the PIR Center, an independent security think tank in Moscow. “The public will now support major military reform, even if it entails financial hardship. Many things that were stalemated for years will now move forward.”

Already, Russian defense budgets are set to leap next year to a post-Soviet record of over $50 billion. Similar jumps are projected for coming years as well.

The fresh increases, announced by Prime Minister Vladimir Putin in late September, are in addition to a special $200-billion procurement program aimed at restoring the country’s degraded strategic forces.

Mr. Arbatov argues that Russia’s military problems run deeper than just two decades of neglect. “There is no political leadership over military organization. Nor is there any democratic control. The system needs to be changed,” he says.

Russian forces entering South Ossetia lacked even basic intelligence regarding Georgian artillery positions and troop deployments, which led several of their leading units into costly ambushes. In one surprise attack, the 58th Army’s senior commander, Gen. Anatoly Khrulyev, was badly wounded and had to be evacuated.

In a desperate effort to get information, the Russians sent an electronic reconnaissance version of the Tupolev Tu-22M Backfire bomber over the battlefield and it got shot down. In all, Russia lost four planes, including three Sukhoi Su-25 attack fighters to unexpectedly effective Georgian air defenses. Some Russian commanders reported using cellphones to communicate with their units when their own radios failed.

Additionally, the tanks deployed by the Russian Army did not have night sights for their guns, and the reactive armor designed to protect them from Georgian antitank weapons proved unreliable.

But of particular interest to me were Andrei Klimov’s comments about NATO and NATO expansion.

Moscow does not feel any immediate threat from the West, say military analysts, despite increased tensions over US missile defense deployments in Eastern Europe and the projected expansion of NATO into the former Soviet Union.

“We regard NATO as a dangerous organization, but right now it’s not so strong,” says Andrei Klimov, deputy chair of the State Duma’s international affairs committee. “The problem is that NATO will become more dangerous if it includes countries like Georgia and Ukraine. In the cold war, when only the US and Western countries were in NATO, it was stable and predictable. We have enough resources to defend ourselves at present, but in the future we will need to think about this.”

I suppose some of my colleagues would code Russian behavior as “not balancing.” But I think the case is getting more and more difficult to make that some of the world is not pushing back.

Stick a fork in it?