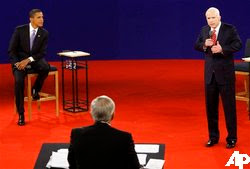 The conventional wisdom was that McCain needed to “take it to Obama.” McCain even signaled that he’d take the gloves off. But Obama swung first and was, in many ways, the more aggressive of the two. I’m not sure what to make of that.

1) I’m hearing a lot of people saying that McCain was more aggressive. I don’t think that’s true. I think his demeanor was more aggressive, and his attacks (with one exception) more personal, and that’s an important difference. It hurt McCain last time.

2) The McCain campaign’s attempt at a “game changer” was clearly the proposal to have the government refinance mortgages. Stop and think about that for a moment, and what it says about the “Republican Revolution.”

3) I thought that McCain narrowly won the last debate, and I turned out to be in the minority. My sense this time is that Obama did better than McCain, and that this is how the public at large will react as well. I’m a former debater and debate coach, but I can’t really put my finger on why I think this debate may turn out to be very bad for McCain. Obviously, comments like “that one” are going to hurt him. But something about the whole tenor of the debate played into the existing narratives about the two: that Obama is steady and articulate, and that McCain is struggling and, well, losing.

…. On further reflection, I’m still stuck on the second point. So, let me get this straight: the candidate of the Republican party just tried to “change the game” by proposing to socialize mortgages?

The Republican Revolution might not be dead, but it’s definitely on life support.

Intervening to stop the Holocaust