A couple of weeks back I visited Arlington for the National Science Foundation‘s Human and Social Dynamics PI conference. The HSD Initiative is one of NSF’s “cross-cutting” programs, which means the same pool of money funds political scientists, neurologists, roboticists, physicists, anything under the sun if the proposal is smart enough and vaguely related to the RFP. The point of their annual gatherings is in part to create interdisciplinary “synergy”: to provoke conversations among scientists from diverse fields who would otherwise likely never meet.

In practice, these gatherings are a bit socially awkward. Try walking up to a biochemist and striking up a meaningful conversation about her research when you study advocacy networks. That weekend, I found myself tuning out of the conference from time to time and tuning into the blogosphere, where in my comfort zone of IR geeks I passed the time with a very engaging discussion about the pronunciation of “nuclear” in US foreign policy discourse. (It is the very fact that I was traveling away from my kids that explains the copious amount of time I had the time to dither over this so extensively.)

But then a funny thing happened. On the very last day of the conference I had that one interdisciplinary conversation that made the awkwardness of the weekend worthwhile: I met a linguist who specializes in the study of how children learn to pronounce words. The argument on this blog about Palin’s pronunciation of nuclear became the basis for a fascinating, one might even say “synergistic” conversation between political scientist and linguist. Apparently, the NSF’s model can have important payoffs.

The most important outcome of my recent foray into the phonological sciences is that I’ve been forced to rethink / dig deeper into many of my and others’ initial assumptions from that earlier exchange. In particular, my new acquaintance was not at all surprised by the results of my crude YouTube coding: from a linguist’s perspective, for example, it makes little sense to explain variation in pronunciation by region, as there is far more variation within regions than between (also variations by gender, class and context, to give a few examples he rattled off). His initial hypothesis – one not actually mentioned in our discussion on this forum – was that the best indicator of the “nuclear/nucular” divide overall was likely to be political orientation.

In fact, this very relationship has been found in a new study of the pronunciation of “Iraq.” While Lauren Hall-Lew and her collaborators do not find any variation on the pronunciation of the first vowel, their carefully coded analysis of Congressional statements and media coverage shows that “Iraq’s second vowel indexes conservativism when produced as /ae/ and political liberalism when produced as /a:/” – even controlling for regional accent. 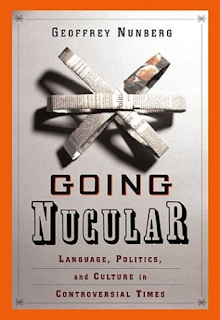 Might the same be true of “nuclear”? Maybe maybe not. After all, Jimmy Carter got it wrong just like George Bush, and Bill Clinton said it right only about half the time. No linguist I have now met knows of a systematic study of “nucular.” But various linguists have hypothesized about it in more sophisticated ways than I did in my initial post. Take Geoffrey Nunberg, author of the book Going Nucular: Language, Politics and Culture in Confrontational Times, who weighs in to support several of the arguments made in comments on my earlier post.

‘Nuclear’ isn’t a hard word to pronounce. Phonetically, nuclear is pretty much the same as ‘likelier,’ and nobody every says, ‘The first outcome was likular than the second.’ And [even if it were] that doesn’t explain why you hear ‘nucular’ from people like politicians, military people and weapons specialists, most of whom obviously know better and have ben reminded repeatedly what the correct pronunciation is… In the mouths of those people, ‘nucular’ is a choice, not an inadvertent mistake. Maybe it appeals to them to refer to the weapons in what seems like a folksy and familiar way, or maybe it’s a question of asserting their authority: ‘We’re the ones with our fingers on the button, and we’ll pronounce the word however we damn well please.’

Which of these stories explains why Bush says ‘nucular’? He must have beard it said correctly thousands of time when he was growing up- not just at Andover, Yale and Harvard, but from his own father. If Bush’s ‘nucular’ is a deliberate choice, its it something he picked up from the Pentagon wise guys? Or is it a faux-bubba pronunciation, the ort of thing he might have stareted doing at Andover or Yale, by way of playing the Texan to all those earnest Eastern dweebs?”

Steven Pinker, after also commenting on Palin’s accent in the NYTimes, disputes Nunberg’s claims (and my idea that Palin was doing this on purpose) in a recent post on Language Log:

I doubt that nucular represents conscious linguistic slumming by Bush or Palin. People generally end up with the accents of their late childhood and early adolescent peers, so Midland and Houston were the formative influences on Bush’s accent, rather than Kennebunkport and Andover. And I wonder whether nucular is enough of a bubba shibboleth to grant a politician more points than he or she loses among the mainstream pundits.

Though linguists are agnostic about the “correctness” of pronunciation, Pinker makes my point, I think in helpfully citing the Merriam Webster dictionary in support of his claim that you don’t have to be dumb to say “nucular”:

“Though disapproved of by many, pronunciations ending in [kyələr] have been found in widespread use among educated speakers including scientists, lawyers, professors, congressmen, United States cabinet members, and at least two United States presidents and one vice president. While most common in the United States, these pronunciations have also been heard from British and Canadian speakers.”

From an IR constructivist perspective, the key is not how often the word is pronounced “nucular,” but whether in fact this pronunciation is “disapproved of by many.”

Whether you agree or not, it’s hard to dispute Pinker’s concluding paragraph:

I think we can all agree that there’s a master’s thesis in here for someone: we lack good data on the regional, class, and age distribution of the two pronunciations, and the linguistic and psychological factors that they correlate with.

Personally, I’d love to see some some experimental research into the question not of why people pronounce it “nucular” but how that pronuciation is perceived, and by whom. Maybe I should team up with some linguists for my next NSF project!

Then again, maybe not. All this thinking about “nucular,” my brain is already starting to forget how to say it “properly.” Curses!