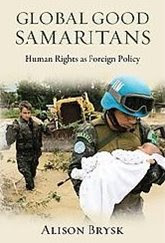 At ISA, I had the pleasure to share a panel with Alison Brysk, whose new book Global Good Samaritans was hot off the presses. I just went through my copy and wanted to offer a few off the cuff reactions.

Brysk’s key contribution is to focus on positive cases – cases where human rights policies have been enacted by states (primarily middle or weak powers: her case studies include Canada, Sweden, Costa Rica, South Africa, the Netherlands and Japan) and have succeeded . Her key goal is to understand why states sacrifice their national interests (resources and citizens’ lives) to help others abroad and her argument is simple: “They don’t.” Instead, such states see “humanitarian internationalism” as constitutive of their national interests. The book is about how they make this calculation. As such it is a helpful (and hopeful) antidote to much of the cynical handwringing characterizing so much human rights scholarship, precisely because that literature has been dominated by analyses of the hypocrisy of US foreign policy.

I shall leave aside discussion of methodological issues; Brysk acknowledges that the empirics are preliminary and she has intentionally left targets for graduate students who will no doubt be avid consumers of her work. But I do have two other comments:

First, though the optimism of her book is refreshing, I’m reminded of McCain’s campaign slogan “hope is not a foreign policy agenda.” I think in building her comparison of the political cultures of these countries with the U.S., Brysk glosses over the ways in which these powers fail on human rights, and the social movements criticizing them. Sweden may “set the gold standard” for human rights prootion abroad, but has a less than glowing record with respect to its indigenous Sami population. Canada may have championed the Kimberly Process but their own “clean diamond” industry comes perilously close to violating aboriginal rights. (I am also reminded of 2000, when I attended the Winnipeg Conference on War-Affected Children, and had to push my way through a massive protest against the activities of Canada’s Talisman oil company in the Sudan in order to get inside where the foreign ministers were setting the human security agenda.)

Seemingly, human rights are what states make of them. Brysk’s case studies would be somewhat more nuanced if they took a more critical look at the paradoxes of domestic human rights political cultures.

As a scholar of advocacy networks however, the chapter I found most interesting was the chapter on “coalitions of the caring.” Brysk emphasizes not NGO networks, but interstate human rights networks – an extremely useful descriptive supplement to the literature on TANs. I wonder, however, if she is not also unduly reifying a distinction between the state and non-state layers of civil society, which are actually pretty blurry. If you map out the “human rights” or “human security” network using various indicators of network ties, you find both interstate organizaitons like the OSCE, or interstate networks like the Human Security Network, as nodes among others that include NGOs but also thinktanks, foundations, news hubs, and UN specialized agencies. I think what we need is an understanding of human rights networks that helps us look past the state/non-state distinction, actually, and look at structural relations between network nodes whatever they be. A paper I heard at ISA by David Davis his collaborators makes this point exactly, as does Wendy Wong’s work.

Iraq: the light at the end of the tunnel