ICC Issues Arrest Warrant for Bashir, But Not For Genocide 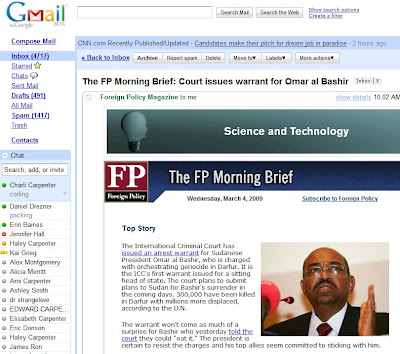 When Foreign Policy’s Morning Brief hit my inbox today, the top story was the arrest warrant issued by the International Criminal Court for President Omar Bashir of the Sudan.

FP’s header gets the charges wrong, however – Bashir is charged with war crimes and crimes against humanity, but not with genocide. The distinction is legally and politically significant – crimes against humanity include a host of horrible acts, when widespread and/or carried out systematically against a civilian population.

Genocide, however, is a crime not against individual civilians but against certain groups and requires a finding that the perpetrator carried out a series of acts with the express intent to wipe out not particular people but the group itself. Note the exact language the prosecutor had to work with, borrowed from the 1948 Genocide Convention and spelled out in Article 6 of the Rome Statute:

“For the purpose of this Statute, ‘genocide’ means any of the following acts committed with intent to destroy, in whole or in part, a national, ethnical, racial or religious group, as such:

(a) Killing members of the group;

(b) Causing serious bodily or mental harm to members of the group;

(c) Deliberately inflicting on the group conditions of life calculated to bring about its physical destruction in whole or in part;

(d) Imposing measures intended to prevent births within the group;

(e) Forcibly transferring children of the group to another group.”

This is a tall order, not only because the definition of what exactly constitutes a “group” is often ambiguous, but because even if the above acts have occurred, and even if they can be linked to the political leadership, those leaders are seldom careless enough to leave paper trails demonstrating the acts were carried out with intent to destroy the group as such.

This explains why there have been only a handful of convictions for genocide in the history of international war crimes tribunals.

In political terms, this is likely to be an unpopular decision – the colloquial use of the term “genocide” as a referent to Darfur, by diplomats and activists, has overshadowed the legal meaning of the term for several years, and many people view crimes against humanity as a lesser charge (though in my mind, systematic rape and slaughter is plenty bad even when there’s no intent to wipe out a whole group). But in legal and institutional terms, the absence of genocide from the charges is a no-brainer: as a new institution, the ICC prosecutor has an interest in making a case he thinks he can win. Whether or not this is a good decision politically is about to be a huge subject of debate – see for example Kevin Jon Heller’s reactions – but let’s remember, the ICC is a legal, not a political institution. In theory.

UPDATE: Not long after I posted this (or perhaps even before I did), Foreign Policy had made a correction – the actual website now shows “crimes against humanity” as the charge.

The end of the era of central bankers?