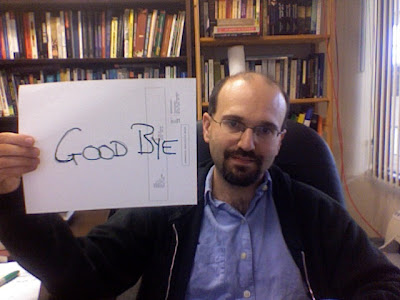 For reasons I noted when I introduced our new bloggers, I will be suspending blogging activities for about a year. I just signed the forms that indicate my agreement to take a one-year position with the powers-that-be, so it seems like the right time to cease blogging.

Before I go, I’d like to thank our readers and my co-bloggers for making writing here so much fun. I don’t have anything profound or insightful to impart, but I feel like I should write a few more words before I go on (hopefully) long-term hiatus.

I started the Duck of Minerva in May of 2005. I’d been blogging anonymously, largely out of fear motivated by all the discussion of blogging as a net negative on one’s academic career. But I ultimately decided that if Georgetown would deny me tenure for blogging, then I didn’t want to be at Georgetown. Besides, if anyone wanted to paint me as an unserious academic, I already had a big fat target

for them under production.

I consider the Duck of Minerva a success. It has never joined the “big leagues” of academic blogging, but we’ve developed what I hope others view as a quality niche blog. We even occasionally get called up from the minors.

But regardless of its reputation, the Duck has provided me with a community of virtual friends and sparring partners, most of whom I never would have connected with otherwise. I consider this the most rewarding aspect of blogging. That community expands and contracts over time; some ties fray while others go stronger. But those ties exist at all only by virtue of the activity.

Before I sign off for what may prove a very long time, I’d like to extend special appreciation to those who supported the Duck in its early days, including Henry Farrell (who seems to take all new academic bloggers under his wing), Daniel Drezner, Marc Lynch, Rob Farley of LGM, Mark of Zenpundit, the guys at Coming Anarchy (who re-designed our banner), and any number of people I’ve left out due to an inconsistent memory and a desire to just get this over with.

Bye all. Even if things work out and I don’t post again until next September, I’ll be hanging around hoping to get a contact buzz.

Losing my religion (or Jimmy Carter follows me)