How is the Afghanistan Election Model Different? 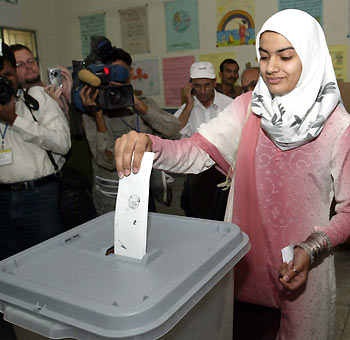 Today much of the world will be focused on Afghanistan, as that country embarks on its second attempt at a democratic election. With a constant threat of violence from the Taliban, the level of participation has been limited. Also, early reports state that police have been cracking down on journalists so information coming out of Afghanistan has been limited. There are, however, several good sources still operations, and I have put together a short list of useful links for following the election below:

Charli had a very interesting post this morning on possible outcomes of this election. She points to another FP post that asserts a worst case scenario for Afghanistan would be a result similar to that in Iran—a disputed election with accusations of fraud. After the Iranian election we had several lively debates at ZIA on ideas for modeling and predicting the outcome of the Iranian election. Also, NYU faculty member Bruce Bueno de Mesquita’s work on using game theory to analyze elections was thoroughly covered over the weekend the New York Times Magazine. Given the apparent power of game theoretic models to predict these processes the question is then: what is Afghanistan’s model?

The immediate and obvious difference between the two countries is the presence of the ISAF, most notable the U.S. military. Given how highly vested the United States is in the outcome of the Afghani election, any model would have to include this force as a key player. More interesting, perhaps, is the internal game being played among the political rivals. No matter the outcome, the declared winner will most certainly have to concede some level of authority to his rivals in order to maintain some semblance of unity among the heavily fractured groups within the country.

Finally, one aspect of this process that is often overlooked, which is a constant point of contention I have heard time and again from friends and former colleagues that have served in Afghanistan, is the underlying tribal dynamics embedded in Afghani political culture. As modelers, particularly those of us who are students of the selectorate model, we often think of elections as competition among an elite set of actors that are attempting to satisfy either a small or large selectorate groups in order to maintain power. The Afghani model, however, may be very different. In this country maintaining power requires balancing the needs of several intertwined tribal groups, with long histories, and subtle relations that span geographies, where their individual utilities for electing a given candidate may be inseparable. That is, one tribal group may wish gain or lose utility as a result of how their vote affects another tribe. As such, is there a way to reconcile the traditional models of power politics with the highly decentralized framework of Afghanistan political landscape?

I welcome your thoughts in the comments.

Troubling Questions About the Afghan Election

A Nuremberg for Guantanamo?