Certain G20 Protesters Senselessly Ravage Beautiful American City Clash With Police in Pittsburgh, Giving the Rest a Bad Name. And For What? 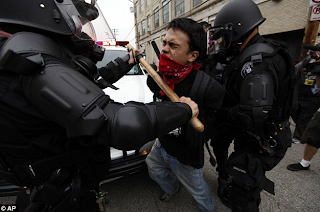 The G20 Summit kicked off yesterday in Pittsburgh, and today the NYTimes reported that anti-globalization protesters vandalized the Boston Market I used to feed my kids at in Shadyside. Aside from feeling a bit homesick when I saw the photo of that neighborhood on the front page, I ask myself what the anarchist block of these movements really thinks it’s accomplishing with these tactics. Bear in mind that unless the movement has changed considerably in the last decade, the majority of the protesters are using nonviolent tactics and it’s only a few on the fringes that are mucking up my beautiful former city.

Here are two standard rationales for anarchist tactics at the protests:

Rationale #1: The “black bloc” legitimizes the wider movement on non-violent protesters by behaving illegitimately. This kind of “radical flank” effect is noted in many social movements, but in this case since the Black Bloc tends to monopolize the press coverage, I tend to think they do more harm than good.

Rationale #2: They promote the movement by inciting a harsh police response that then tarnishes the authorities in the public eye, creates press for the movement and helps the mainstream nonviolent protesters look like helpless victims. Classic insurgent strategy, can be quite effective but like other forms of violent protest or terrorism, often has the opposite effect of making moderates look like they’re associated with extremists.

I have a more cynical hunch based on my memories of being involved in the organizing run-up to the 1999 Battle in Seattle while in graduate school at University of Oregon: at best those two rationales serve as justifications. I suspect that anti-globalization vandalism isn’t tactical at all but rather primarily self-promotional. Individuals in fringes of the anti-globalization movement may be doing it for no better reason than to earn status among their peers, a small minority of the wider movement. A shame to see an entire protest effort tarnished by the self-aggrandizing activities of a few.

Also, I wish they would stop wrecking my Pittsburgh!

The legitimacy of America’s wars

How Multilateral Can Obama Be?