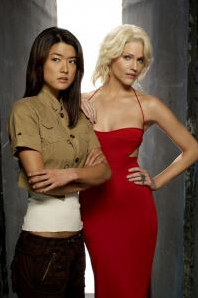 This just in from the Interwebs. According to Airlock Alpha, the film Battlestar Galactica: The Plan won’t air on Syfy until next year.

“The much anticipated movie, which is a new take on the pivotal events of “Battlestar Galactica,” will tell the story of the attack on the Twelve Colonies from the point of view of the Cylons.

Fans are eagerly anticipating the release and with much reason. The show ended in April, which left a lot of fans wanting more after only four seasons. Edward James Olmos, the director and legendary Adm. William Adama in the series that ran from 2003 to 2009, has said on numerous occasions that when “Battlestar” fans see “The Plan,” “They’re all going to have to go back and watch the entire series again.”

The DVD will still be released Oct. 27, and there’s no word from Syfy that this street date will change.

Also, no projected change in the airdate of the new Caprica series in January. Whew.

This Movie is Every Kind of Sick.