“Not in Anyone’s Backyard”: Andrew Yeo on the “No Bases” Network 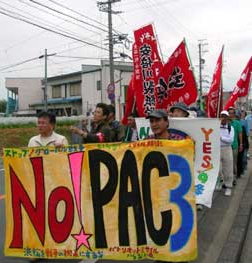 This issue of International Studies Quarterly includes an article by Andrew Yeo on the emergence of an advocacy network against foreign military bases. Aside from the minor fact that Yeo omits reference to an important recent contribution to the literature on basing politics, I found his process-tracing of the No Bases Network fascinating. Here’s the abstract:

I liked this article because it’s a great substantive example of what I look for in my work: interesting ideas that could be converted to international norms and have attracted supporters but have not yet hit the mainstream human rights/human security/disarmament agenda. Yeo is interested in network emergence and identity; I’m more interested in how a network mobilized around a new idea like this manages to market itself to the mainstream NGOs who most have the ear of governments and the UN. This one’s the kind of “aha” case I like to find – something that makes intuitive sense but I hadn’t thought of or heard articulated before.

(Or does it make sense? In Empires of Trust Thomas Madden argues that the regional security provided by a hegemon’s military presence outweighs the negative externalities of military bases. Interesting counterfactual.)

Well, whether it is a good idea or not in “human security” terms, this is a network with an idea that one could imagine being promulgated as a global norm as easily as the idea of banning landmines, only you don’t hear mention of it at the global level: it’s an issue not yet “on the agenda” the way many other global problems are. And Yeo’s analysis of the Iraq war as a focusing event that triggered the consolidation of disparate domestic networks into a transnational movement suggests an obstacle this network need to overcome in order to attract support from large NGOs and achieve anything like real international norm change: the perception that this is really an anti-US movement instead of a movement to address a problem that’s inherently global.

The legitimacy of America’s wars