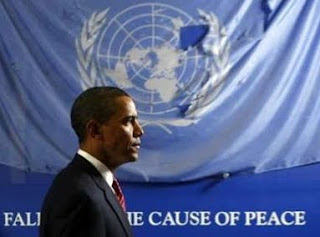 According to the Nobel website, the Peace Prize is supposed to be awarded annually to “the person who shall have done the most or the best work for fraternity between nations, for the abolition or reduction of standing armies and for the holding and promotion of peace congresses”.

In 2009, the Norwegian selection committee decided that the most deserving person is Barack Obama.

Yes, I was pleased in April when the President declared, “clearly and with conviction, America’s commitment to seek the peace and security of a world without nuclear weapons.”

Furthermore, I was grateful in January when Obama ordered the closing of the prison at Guantanamo Bay and the banning of torture.

And I look forward to the implementation of the plan to withdraw from Iraq by August 2010.

As promised, Obama’s has the U.S. talking to Iran. He has the U.S. working hard on peace between Israel and Palestinians.

And yet — most of these accomplishments are mere promises to act.

The gap between hope and change is fairly large and I’m surprised the Nobel committee decided to award the former. Perhaps they figured that the prestige of the award might help propel some of these plans towards fruition.

Much of the world is pleased (or say that they are), while the Taliban is unhappy (as are opposition groups in Pakistan).

I do not think the choice is bad or outrageous, but it is curious — more a political statement than anything.