I Am Shocked, Shocked To Learn That Human Rights Reporting is Political 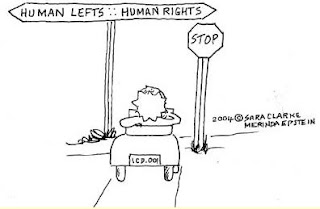 James Ron and Howard Ramos have a piece in Foreign Policy on how Human Rights Watch and Amnesty International select countries to criticize. Especially, they talk about how media coverage drives human rights reporting:

Human rights groups are partly true to their mission, since they report more on countries with more human rights problems…Amnesty and Human Rights Watch also seek visibility and impact, however… Like any advocacy organization concerned with real-world effects, the watchdogs feel compelled to respond to media interest. Supply rises with demand; the more journalists who ask about a country, the more information watchdogs will supply.

…This, for better or for worse, is the way the news game is played. The media report on issues or countries it thinks readers care about, and advocacy groups of all stripes respond in kind, creating the virtuous (or vicious) cycles that drive public attention.

Hmmm… well, the actual study they are describing in their article is a bit more nuanced. In the scholarly version, media coverage is only one of several factors explaining reporting patterns, including whether an organization has previously reported on the same topic; or how powerful the target of influence is. But then again, Ron and Ramos are writing for a beltway journal now, so nuance be damned they can be forgiven for a little simplifying.

Still, the media-watchdog relationship may be over-determined in this account. Surely it goes both ways: Human Rights Watch and Amnesty do not just follow the news, they create it with their reports. Consider Darfur, a festering civil war which suddenly became politically interesting early in 2004. The first media report on Darfur occurred directly as a result of the pioneer journalist having read an Amnesty International report on Darfur published six months earlier.

Third, it will be interesting to see if this model, to the extent it is valid, holds true for thematic human rights issues rather than country-reporting. I don’t have statistical tests to show you (not yet anyway), but I can think of lots of counter-examples to the argument that media attention drives watchdog attention on thematic issues. (Journalists loves “robot menace” stories, but so far these organizations have not gone there.)

Regarding the alleged viscious/virtuous circle, Ron and Ramos go on:

Whether this is this a good or a bad thing depends on your ethic of moral engagement. If you believe in Quixotic struggles and think watchdogs should swim valiantly against the tide, you’ll castigate Human Rights Watch and Amnesty for investing more resources, time, and energy on countries already in the news. ‘What about Niger?’ you’ll ask. And if you’re young and rebellious, you might even mutter something nasty about corporate sellouts under your breath.

But if you believe an advocacy group’s highest purpose is to make a difference, you’ll support the strategy of focusing on targets of opportunity. You’ll also think that investing scarce activist resources in low-interest struggles should be done sparingly, lest the few watchdogs we have go bankrupt in pursuit of lost causes.

1) Most of the mudslinging about Amnesty comes from the young and rebellious? Really? To me it seemed more like the old, cranky and conservative.

2)Amnesty and HRW aren’t “the few watchdogs” we have; they are simply the most visible and well-networked – see this paper by Amanda Murdie and her collaborators.

3) I worry about the reification of “low-interest struggles” in this piece. Low interest to whom? Not those in Niger. And not inevitably. Darfur too was once an ignored crisis.

So a really interesting question is what role human rights organizations can and do play in generating “interest” – in advancing the human rights agenda – in the absence of media attention; and why they choose to play that role sometimes and not others.