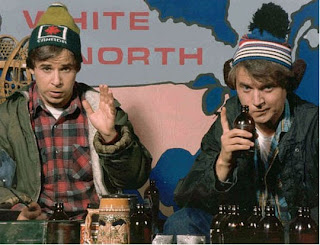 For my first blog post here at Duck of Minerva, I thought I should stick to one of my areas of experience (if not expertise): Alcohol.

The Canadian Press has picked up on the fact that although there are many Canadian wines available at the Canadian Embassy in Washington, there are only three Canadian beers (– and hardly the finest that the landmass north of the 49th has to offer: Molson Canadian, Alexander Keith’s Ale or Blue Light.) Considering that is the nation of Bob and Doug, this hardly seems fitting.

I’ve been at two soirees at the Washington Embassy this year – and many at the Canadian High Commission in over the course of doing a PhD. At either, the Canadian beer choice selection never really seemed to be lacking.But beer is as important to the Canadian identity as hockey, maple syrup and national embarrassment over Celine Dion, and clearly the Canadian Press believe the situation is important enough to make the national news.

So, this got me to thinking as to the subtle ways nations represent themselves abroad: food, drink, background music, etc. This is different, I think, from deliberate cultural representation where embassies and governments sit, choose and plan what events they will put on display – such as exhibitions of native arts, traveling national symphonies, ballets and operas, etc. Rather, it’s almost the unintended representation which may speak volumes about a country.

During the Bush years, the American Embassy in held a series of film screenings of “great” American films, (including Flags of Our Fathers – hardly a pro-war film.) The screenings, organized by the cultural diplomacy section, were to presumably remind Londoners of the contributions of to the world. This clearly represented an attempt at winning hearts and minds through free popcorn. However, the fact that viewers had to climb through security worthy of the Green Zone in , may have sent a more powerful message than what was on the screen.

But let’s bring it back to more pleasant things – like coffee and donuts. Perhaps even more important than flack-jackets to Canadian troops is the Tim Hortons, the beloved Canadian chain of coffee stands (even mentioned on How I Met Your Mother) put in Kandahar to boost troop morale. (It might be the one thing that unites all Canadians.) The coffee stand has, apparently, also been attracting troops from different countries, eager to try a “double-double”.

But this seemingly works for other nations as well. In his book, The Interrogators, Chris Macky, frequently spoke of his desire to go to the compound because it gave him a chance to leave the “dry” military base and have a gin and tonic. And having friends who had access to the American PX in was always important for those who wanted access to “real-fake” peanut butter and chocolate.

Is this form of cultural diplomacy, discussions over donuts in , more important than screenings, parties, evenings, and concerts? Is it important for embassys to consider the unintended ways they can fly the flag – whether negatively or positively? Or should we all just relax and enjoy our Keiths in peace?