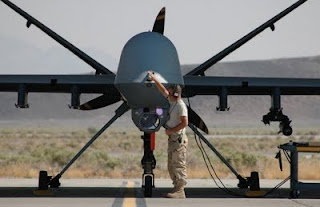 The New York Times reported Friday that the Obama Administration has stepped up its Predator strike campaign in Pakistan concurrent with the announcement of a troop surge in Afghanistan. The article focuses on comparing estimates of civilian casualties from strikes and estimates of how controversial the strikes are – interestingly, the greatest blowback comes from Pakistanis who live outside of the tribal areas: many of those in the FATAs presumably approve because they are worse off when the militants have free rein in the area.

An Amnesty International representative is quoted as saying that regardless of civilian casualties or political support, the attacks are problematic as such:

‘Anything that dehumanizes the proces makes it easier to pull the trigger.’… The political consensus in support of the drone program, its antiseptic, high-tech appeal and its secrecy have obscured just how radical it is. For the first time in history, a civilian intelligence agency is using robots to carry out a military mission, selecting people for killings in a country where the US is not officially at war.

I see an important error and an omission here.

First, drone are not robots. They are remote-controlled weapons piloted by a human being. We should bear in mind the distinction between such weapons and truly autonomous weapons with the capacity to make independent firing decisions. (At Firedoglake, Scarecrow has other issues with this quote.)

As for the social distance between weapons-bearer and victim, this debate is as old as the long-bow and catapult, and is not what makes the US’ drone strikes radical. The bigger issues with drone is not whether they’re as surgical as we hope, but whether the mission itself is legitimate. The targets of such strikes are political leaders of a social movement / terror network / insurgency call it what you will who are, by and large, going about their business at the time they are killed. As Mary Ellen O’Connell explains at IntlLawGrrls, assassinating them rather than capturing them and putting them on trial is counter to international law.

And it’s important to bear this in mind as evidence begins to mount that drone strikes are effective. I’m not going to argue that they may well be. A policy can be effective and still have too many negative externalities to be worthwhile. Or, it can be worthwhile from a policy point of view and still be wrong.

Ward Thomas has shown that there are good reasons why assassination is against the rules of war. If Obama is going to persist with drone warfare, I’d like to see our “multilateral President” make a solid legal argument for why this is consistent with international law, or seek to amend the law to fit the changing times. Simply violating it without a discussion reminds me too much of his predecessor.