What is the status of CIA drone operatives in international law? (Short answer: I don’t know, but that shouldn’t matter.) 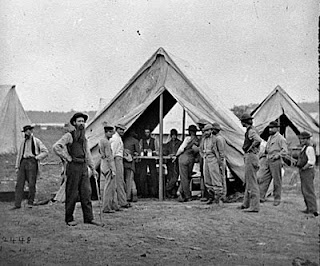 Despite our modern ideas about a separation between civilians and soldiers in international law (and then complain about the breakdown of the legal distinction in counterinsurgency conflict or situations like Pakistan), civilians have almost always accompanied military forces into the field. These include journalists, clergy (not within the armed forces of an army) and “camp followers” which may have included cooks, tailors, menders, prostitutes, etc.

That these individuals were there and an essential part of the operations of the armed forces, was accepted. Yet, because they were not formally “enlisted” they were considered as civilians and not subject to direct attack so long as they did not take a direct part in hostilities.
This doesn’t render the principle of distinction irrelevant of course. It’s still one of the key principles upon which the law of war rests. However, it does suggest that we sometimes forget that the line has not always been crystal clear between combatants and civilians.
Yet, a major recent difference has been the increasing technological dependence of the armed forces in their military missions. This has resulted in civilians working on computer and weapons systems, possibly crossing certain lines in terms of distinction and participating in a conflict in a direct way.
Efforts trying to regulate civilian participation have not been particularly successful. As is relatively well known, efforts to regulate private military firms (PMFs) have been less than satisfactory (and even the US government who employs them has trouble exercising jurisdiction over their behaviour). The Montreux guidelines are just that – guidelines – and without any enforcement mechanism.
However, the CIA drone issue is different from that of PMFs. The CIA is a state-sanctioned institution. It’s armed and uses force against other actors. So what does it mean for their status under their international law? Are they directly participating in hostilities? Is their participation allowed?

Other important “guidance” here comes from the (controversial) ICRC study on the direct participation in hostilities. This document has been, is and will be subject to a lot of scrutiny (and it will be interesting to see, exactly, which states consider it authoritative. I’m thinking not many…). However, for our purposes here, a lot of the criticism (typically directed to ‘insurgent’-like actors and a supposed ‘revolving door of protection’) does not really apply.

Actually, the position taken with regards to private military firms and civilian employees would seem consistent with what the United States has typically put forward:

III Private contractors and employees of a party to an armed conflict who are civilians (see above I and II) are entitled to protection against direct attack unless and for such time as they take a direct part in hostilities. Their activities or location may, however, expose them to an increased risk of incidental death or injury even if they do not take a direct part in hostilities.

The fifth point of the study, (V Constitutive elements of direct participation in hostilities) is more controversial as some might deem the criteria as far too narrow for the purpose of modern fighting. (ie: On just one point, the United States would likely argue that someone who did financing for a terrorist organization was ‘fair game’). While this might provoke more controversy for their targets, for our purposes, the DPH guidelines suit the CIA Drone pilots rather well.

In order to qualify as direct participation in hostilities, a specific act must meet the following cumulative criteria:
i. The act must be likely to adversely affect the military operations or military capacity of a party to an armed conflict or, alternatively, to inflict death, injury, or destruction on persons or objects protected against direct attack (threshold of harm), and
ii. there must be a direct causal link between the act and the harm likely to result either from that act, or from a coordinated military operation of which that act constitutes an integral part (direct causation), and
iii. the act must be specifically designed to directly cause the required threshold of harm in support of a party to the conflict and to the detriment of another (belligerent nexus).

Regardless of whether or not the threshold is too high or narrow, there is no question that what the CIA drone pilots are doing falls into this category.

I’m curious as to what other international legal-politicos out there think of this. Am I missing something? Law simply does not have all of the answers – at the end of the day, I think it will be more helpful if the CIA program is going to have to be judged on its effectiveness vs the amount of damage it does and this will likely be done on political and moral grounds.

Seeing the whole board on financial reform