Garzon’s Reign in Spain Falls with Mainly Who to Blame? 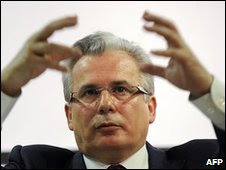 It was announced last week that Judge Bathazar Garzon will be investigated for over stepping his authority for knowingly taking on a case that was outside of his jurisdiction. Garzon is, of course, famous for indicting Chile’s General Pinochet for crimes against humanity in the 1990s which lead to his arrest in London (although he eventually was let go on medical ground – and died).

Since 2008, Garzon had apparently been turning to domestic figures, looking to open an investigation and prosecution against those Spanish officials which allegedly were involved in acts during the Franco dictatorship that could amount to crimes against humanity. While there is a 1977 amnesty law – passed to help with the transition to democracy – it was Garzon’s contention that such a law could not cover crimes against humanity and therefore officials could be prosecuted.
The probe into Garzon came after two far right political groups brought legal action against him. For his part, Garzon is arguing that the probe amounts to a serious attack on judicial independence.
Clearly the situation is serious for Garzon because it will probably suspend his career for some time and it could result in him losing all of his judicial powers in Spain.
A couple of thoughts on this –

Reaction from the left and right has been fairly predictable. This article on the Guardian website declares that “justice itself may be the victim” if Garzon is found guilty. His indictment of Pinochet is described as ushering in “the heyday of international justice”.

Really? A heyday? It never seemed like much of a heyday to me – the number of war crimes trials is still relatively low and predominantly focuses on African countries.
Additionally, the movement to setup the ICC had already been established by the time of Garzon’s indictment of Pinochet and the ICTY and ICTR were already functioning (sort of in the case of the later). Garzon is not and does not singlehandedly represent international justice… just one kind of form of it that people on the right tended to find irritating.
Speaking of the right, Eric Posner today describes the charges in the Wall Street Journal as “the end of a failed experiment in international justice” and that universal jurisdiction “increasingly and thankfully, looks like a pipe dream”. Posner then predictably launches into an assault against international law the ICC.
The problem with Posner’s argument is that what Garzon was doing and what the ICC does are very different things. The former was using universal jurisdiction within his own state to prosecute those he saw as war criminals in Europe. The ICC on the other hand has a Statute and binds member states (although citizens of a non-state party may be indicted if they commit a crime on the territory of a party).
Of course there are some similarities here but Posner is making a mistake in assuming that there is one giant global justice movement (although sometimes even international lawyers like to portray it that way). There are different approaches and different legal mechanisms. Stopping Garzon is not going to take away from the functioning of international courts.
However, one thing that Posner does get right, I think is that we have gotten away from the original purpose of universal jurisdiction :

Universal jurisdiction arose centuries ago to give states a means for fighting pirates. In recent years, idealistic lawyers have tried to convert it into an all-purpose instrument for promoting international justice.

I think he has a point here – that international lawyers have tried to stretch a concept over a larger and larger areas where it may not necessarily fit so well.

Still, the key thing here in relation to Garzon is that the charges against him do not mean that the ICC will be going away anytime soon. Nor does it mean that global justice is collapsing forever. No one figure can represent all that is international legal justice.