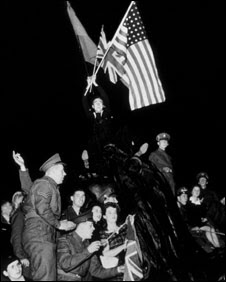 I will be writing more on the outcome of the British election soon, but for now I thought that I would post in recognition of the fact that it’s the 65th anniversary of V.E. Day. (You know, in that whole World War II thing that pretty much allows Britain – and most of Europe – to have elections in the first place.)

Today there was a ceremony marking the occasion in central London. Interestingly, the focus on the event seems to be on the average ordinary people that were on the home front, celebrating the news that the war, in Europe at least, was over.

Happy pictures of dancing Brits aside, the anniversary had me thinking about how wars actually end. While I remember the day Saddam Hussein surrendered in 1991, our generation, by and large, will likely never know such an occasion. Despite the fact that the West has been fighting a war for several years in Afghanistan, in all likelihood, we will not, at 3pm on any given day, know that the war our nations have been fighting is over.

Such a day is impossible, of course, because we have no idea what victory will look like. Certainly we could postulate some ideas – having Afghanistan become a nation able to credibly (relatively?) defend itself; perhaps as a place where girls can go to school free from attacks and harassment. Or even, more basically, where we can walk away, cross our fingers, and hope that the threat of international terrorism is contained. However, no government or organization has truly been able to articulate a vision for the end of hostilities in Afghanistan.

It’s interesting for more than just moral reasons, of course. Much of international law related to warfare is predicated on the idea that there will be such an actual ending to war. This is true for the law related to prisoners of war, neutrality, the use of force (obviously – but key for issues like targeting) just to name a few areas. How we will manage the ‘end’ of the war on terror in legal terms has very much yet to be determined.

But for now, I’ll just leave you with Dame Vera Lynn.

Is It Time to Ban Explosive Weapons in War?