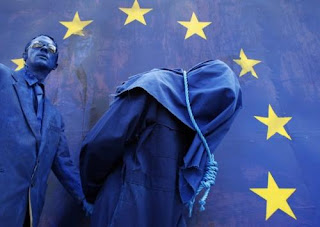 The coalition government here in the UK has announced that there will be an inquiry into torture and rendition alleged to have been carried out since 9/11. This was a major item platform for the LibDems and some Tories, the latter group while conservative, committed to a deep sense of eroding “British values”.

It’s early days, and we do not know what such a commission would look like, but if this Guardian article is correct, individuals will be named and shamed:

The judicial inquiry announced by the foreign secretary into Britain’s role in torture and rendition since September 2001 is poised to shed extraordinary light on one of the darkest episodes in the country’s recent history.
It is expected to expose not only details of the activities of the security and intelligence officials alleged to have colluded in torture since 9/11, but also the identities of the senior figures in government who authorised those activities.

Some early thoughts:
First, there is no doubt some of the motivation here is for the other two parties to really stick it to Labour. But to be honest, it’s nothing that they haven’t brought onto themselves if the Inquiry does find that then-senior Labour MPs/Cabinet ministers knew they were acting illegally.
So, provided the allegations can be substantiated (I’m guessing at least some will), the bigger question will be if these individuals justified, in any way, of making the decisions they did, under the circumstances. (The Michael Walzer/Dirty Hands approach). Human Rights lobby groups are probably going to give a definite “no” to this but it will be interesting to see what an inquiry will say.
Any individual named by a commission would have a very difficult time traveling around the rest of the Western world, particularly Europe, for a very long time. While the commission would not in and of itself be a trial (it seems to be framed as an accountability mechanism more or less) it could lead to formal charges elsewhere. The UK is, after all, party to the ICC.
Finally, for relatively obvious reasons, I can’t see this happening in the US. Yet it seems clear that the decisions of US decision makers, and their impact on UK decision makers, is going to come to light. Like the Iraq Inquiry, a UK commission will effectively be putting US policy on trial.
However, I can’t see something like this happening in other countries like Canada either – where there is a good chance that senior government ministers in both political parties made decisions that contravened the CAT or their own domestic laws. Although, to be fair, the Canadian government at least held a commission as to why a citizen was permitted to be rendered to Egypt for torture and the Canadian government officially apologized. No official was ever held accountable.
Stay tuned…

What “New Rules of War?”

What ISA Can Learn from Small Niche Conferences