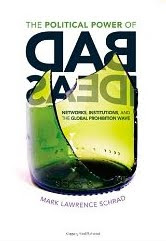 I am reading a fascinating new addition to the literature on the influence of transnational advocacy networks in world politics: Mark Lawrence Schrad’s The Political Power of Bad Ideas. Essentially a history of the prohibition movement, his broader theoretical point is that transnational advocacy networks not only influence governments into doing what they should (like banning landmines and the recruitment of child soldiers) but also, sometimes, into making bad policies. His book is interesting because most case studies of advocacy networks focus on worthwhile campaigns that succeeded – abolitionism, women’s sufferage and the like – rather than either good ideas that failed or bad ideas that succeeded.

To Schrad, prohibition is a uniquely illustrative case. He details the nineteenth century’s temperance movement as an early example of transnational activism, and traces its influence on the epidemic of prohibition policies across the globe. I haven’t finished the whole book, which includes in-depth comparisons of U.S., Swedish and Russian policies on alcohol, but I’ve read enough to recommend it to those interested in global civil society.

Of course the book doesn’t preach about current issues, but it does invite certain questions about other, comparable bad ideas that have taken root globally in recent years.