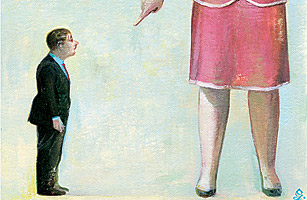 Reading a recent TIME article on “Why Women Candidates are Talking Tough” inspired me to blog about the upcoming elections a little bit. While there are a record number of women candidates for national office, predictions are that women will lose ground in representational terms. If women pick up any ground (or even don’t lose it), it is predicted to be GOP women winning seats and Democratic women losing them. With so many unappealing women to vote for (whose names I’ll leave off this blog post to be polite), and so few appealing women to vote for … what’s a progressive, Democratic, pro-choice woman to do?

I realize that this sort of behavior is exactly what people think feminists do (that they don’t) that gives feminists a bad name (unjustifiably), but I think it might be an important thought experiment anyway.

So the argument against voting for women just because they are women is that it doesn’t make any sense to vote against your political interests in a democracy, and doing so in effect is voting against one’s political interest. Another argument against such behavior is that feminists argue that the category “woman” is in itself false and problematic.

Conceding both of those things … what if the election (nationally and locally) is already lost to the political cause of those of us who are progressive, pro-choice democrats?

The United States falls below the world average of women’s representation at every level of government – there is a woman-majority parliament in Rwanda, and dozens of places around the world where women constitute more than 35% of the parliament or Congress. In the United States, it is less than 20 percent. Women are drastically underestimated in gubernatorial offices and the cabinet, and there has never been a woman president.

This is not incidental – it is symptomatic of systematic gender bias in the United States. It is no coincidence that women are drastically underrepresented – our ideas about what it means to be a leader correspond to masculinity (which women must constantly prove while men are assumed to have it). Still, women leaders must be “as manly as men” (so they can’t cry) while maintaining their femininity (so they can’t be too aggressive).

Waiting for these masculine (and therefore secondarily male) biased gender rules to disappear is like trying to find atlantis. So how do you get involved to end it? Maybe the answer is to vote for women. Because the more female faces we see in office (regardless of political preference, assuming, in 2010, that’s predetermined), the more we have to confront our underlying gender biases in definitions of leadership and voting habits. Maybe? Or maybe we’ll just lose a lot of women’s rights ground at the same time …

Zombie NATO? Or, the Poverty of Realism