Zombie NATO? Or, the Poverty of Realism 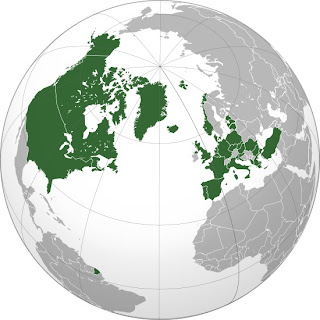 A great many bloggers and policy wonks, motivated by the upcoming Lisbon Summit, are weighing in on NATO’s future. NATO faces a number of challenges and difficult issues, including:

While opinions differ over the health of the alliance, I’ve been particularly struck by the weakness of Steve Walt’s arguments for why NATO is headed for membership in the society of the walking dead. He isolates three major reasons for his negative assessment: Afghanistan, defense cuts, and Turkish foreign policy.

Today Walt reported the results of a debate he held in his MA international relations class (“NATO Lives!”), but reiterated his belief in NATO’s growing irrelevance:

Here the three big wild cards are 1) The effects of the latest round of European defense cuts (which will make out-of-area actions even more difficult in the future), 2) The lessons that NATO draws from the Afghan War, and 3) The rising importance of Asia. If Afghanistan is eventually seen as a successful operation that produced a positive result, then NATO’s value will appear to be reaffirmed and support for it is bound to continue. If the Afghan war ends in a defeat or even some sort of messy compromise, then more people will ask if the Alliance ought to be in the nation-building business at all. And if it’s not performing some sort of global policing duties, then what is it for? Finally, as the Asian balance of power starts to loom larger in everyone’s consciousness, NATO’s relevance will almost certainly decline even further. NATO may be willing to give the United States some modest assistance in the Gulf or in Central Asia, but it is hard to imagine Europe doing much of anything in some future conflict over Taiwan or the South China Sea. Indeed, they’d be more likely to stand aloof and trade with both sides.

As Walt himself notes, he’s been beating this drum for some time; indeed, realists have been proclaiming the death of NATO since at least the end of the Cold War. Their fundamental reasoning lies in an understanding of alliances as balancing coalitions; with the passing of the Soviet threat, NATO’s purpose disappeared. Since then, NATO has searched for a rationale: policeman of Europe’s turbulent frontiers (e.g., the Balkans), democratic security community, global rapid reaction force, etc. Realists are predisposed to view each of these purposes with suspicion anyway, and every piece of evidence that they’re fraying provides, for realists, another nail in NATO’s coffin.

None of these arguments are ridiculous. NATO has significant problems. The contemporary shift of power from Europe to East Asia does, in some respects, make NATO less important to global politics than it was during the Cold War. And nothing lasts forever–at some point not only will NATO disappear, but so will most contemporary political institutions.

At the same time, Walt’s reasoning seems a bit off.

First, Turkey. I simply cannot understand why he places so much weight on recent Turkish overtures in the Middle East. After discussing disagreements over Iran and Israel, he writes:

Rising Islamophobia in both the United States and Europe could easily reinforce these frictions. And given that Turkey has NATO’s largest military forces (after the United States) and that NATO operates largely by consensus, a major rift could have paralyzing effects on the alliance as a whole.

Walt doesn’t explain why the size of Turkey’s military matters. For what it is worth, Turkey currently contributes less than two percent of ISAF’s total forces. Its contributions to other operations–e.g., IFOR, SFOR, and KFOR–have varied widely, but none of these NATO missions depended on a Turkish military presence. But even putting aside Turkey’s significance in recent NATO operations, it isn’t at all obvious why the size of Turkey’s military makes Ankara’s dispositions more important to NATO cohesion than, say, London’s, Paris’, or Berlin’s.

Obviously, NATO would face additional problems if major rifts opened up with Turkey on issues of substantive importance to the alliance. Indeed, Turkey does disagree with other important members over tactical nuclear weapons and conventional arms control. But it isn’t at all clear what kinds of NATO actions a more “neo-Ottoman” foreign policy would preclude. If the US strikes Iran, it won’t be as part of a NATO operation. If the US deploys forces in support of Israel, it won’t be part of a NATO operation either.

Second, ISAF and defense cuts. Walt’s arguments on both these fronts reduce to the same claim: the future of NATO out-of-area operations looks grim, and thus NATO will be deprived of a key rationale for its continued “vitality.”

In fact, current defense cuts make clear NATO’s ongoing importance to Europe. By co-binding virtually the entire Atlantic and European Community, whether through direct NATO integration or the Partnership for Peace (PfP) program, NATO has created an unprecedented security community. Every major power (save one) on the continent has interoperable military forces linked together via multiple consultative and coordinative mechanisms. As Walt’s students correctly noted, NATO has greatly diminished the likelihood of security dilemmas, arms races, and military instability within its borders.

NATO not only plays a key role in mitigating the pathologies realists associate with anarchy, it also continues to serve a deterrence function–most notably with respect to the Russian Federation. NATO membership, or lack thereof, makes a major difference to the strategic environment faced by former members of the Warsaw Pact and the Soviet Union. Moscow would, for instance, enjoy significantly more influence Estonia, Latvia, and Lithuania if the three had remained outside the alliance.

NATO security guarantees also structure, for the better, current European and US engagement with Moscow. They have done so not only by, for all intents and purposes, eliminating the threat posed by Russia to the most forward-looking NATO advocates of extensive political-military engagement with Moscow (e.g., Germany and France), but also by reducing Moscow’s ability to play divide-and-conquer games in Europe. It isn’t so much that Moscow doesn’t play those games now (it does), or that it hasn’t enjoyed important successes in doing so (it has). Rather, without NATO’s co-binding institutions and practices, Moscow’s wedge strategies might well be pulling Europe apart.

Although it may seem somewhat paradoxical, this state of affairs has been a net positive for the Russian Federation. A more realpolitik environment in Europe, even one driven, in part, by Moscow’s power-political influence, would greatly undermine Russian military and economic security. Indeed, Russia’s long-term ability to meet the challenges posed by a rising China depends on stable, predictable, and friendly relations with its major western neighbors.

Yet Walt’s line of reasoning reduces all of these effects to little more than the shamblings of a Zombie. If NATO fails to send expeditionary forces abroad, cannot come to a consensus on Iran, or plays no role in a future Taiwan straits crisis, then it is “irrelevant.” What could possibly account for such an assessment?

The answer lies in Walt’s theoretical commitments–in particular, realism’s jaundiced view of international structure. By this I do not mean, as most constructivists argue, that realists pay inadequate attention to culture. Rather, realists lack adequate appreciation for the ways in which political and social ties–including alliances–texture international relations. They see international politics as patterned by “anarchy” and “the distribution of power.” All the rest is merely “process.” But it should be obvious that NATO profoundly structures Eurasian political and military relations, and will still do so even if its ability to act collectively further declines. Whether or not one agrees with my assessment of how NATO structures Russia’s strategic opportunities, it strikes me as difficult to argue that NATO’s impact on western Eurasia has no significance for the future of East Asian security relations. At the very least, it does so not only by shaping the political, military, and economic environment confronting Moscow, but also that of policymakers in Washington, DC.

Perhaps, then, it would be most accurate to say that whether the future includes “live NATO” or “Zombie NATO,” NATO will hardly be irrelevant to global politics.