Election 2010: the Foreign Policy Elephant in the Room (updated) 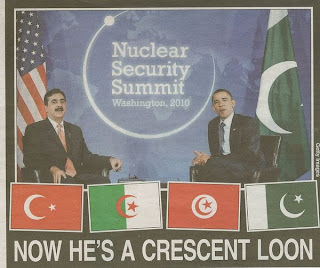 CBS Nevada reporter Nathan Baca tried to approach [Sharron] Angle during a stroll through the airport and the airport parking lot with questions about her foreign policy views.

After going through several evasive answers, an irritated Angle replied: “I will answer those questions when I’m the senator.”

Much of the liberal reaction to Angle’s latest evasion of the press has taken the form of “if she can’t face reporters, how can she a U.S. Senator?” In light of Angle’s general bizarreness, I can understand the comparative lack of attention given to issue areas she refused to address. But, as Dan Drezner’s noted, the 2010 elections have been marked by an almost total absence of foreign-policy debate. That’s not surprising. The Obama Administration hasn’t exactly been “soft on terrorism,” the unemployment rate hovers near ten percent, and Republican politicians basically support U.S. involvement in Iraq and Afghanistan. In short, international affairs doesn’t provide particularly rich soil for harvesting votes.

However, this election may prove quite consequential for U.S. foreign relations. Even if the the Democrats hold onto a slight majority in the Senate, the legislative branch is about to shift significantly rightward. This is not a terribly comforting thought, given that the current GOP combines an impoverished foreign-policy playbook with a scorched-earth mentality toward the Obama Administration.

First, Republican opposition to New START. While New START is not without its problems, none of them bear any resemblance to the outlandish criticisms offered up by the GOP. Even Robert Kagan admits that conservative objections to the treaty don’t justify blocking ratification. The charge that the administration, whose deterrence policies depend on a robust commitment to the Phased Adaptive Approach (PAA) to Ballistic Missile Defense (BMD), is willing to let Moscow veto BMD policy, should strike any observer as particularly ludicrous.

New START is, in many respects, a rather modest nuclear arms-control agreement; the major differences between a world with and without ratification are twofold: in the latter, the U.S. (1) lacks important tools to monitor Russian nuclear happenings and (2) loses significant credibility when it comes to negotiating binding agreements with not only Moscow, but other foreign powers. Yet all indications are that the Republicans will block ratification.

Second, the tenor of Republican media on U.S. foreign-policy issues. For example, The 2010 Nuclear Security Summit contained its share of successes and failures. Among the latter was a series of botched attempts to forward Turkish-Armenian normalization, which only succeeded in undermining US-Turkish and US-Azerbaijan relations (the latter wasn’t even invited to the Summit). During all of this conservative media was interested in one burning question: was a stylized version of the Bohr model actually a quasi-secret sign of Obama’s interest in imposing Sharia law in the United States, appeasing Iran, or something. Otherwise, the summit was mostly met with conservative silence.

Third, the commitment to unlimited defense budgets. Even as conservatives criticize the Obama administration for record deficit spending, they still find time to complain that military spending is too low. Seriously. The “finest” foreign-policy minds in the GOP think the Obama Administration is jeopardizing U.S. military preparedness against decades-away threats by not pushing a sufficiently large increase in U.S. defense spending. That sound you hear is Zombie Eisenhower crying.

So we’re likely in for an opposition with international-affairs positions variously inherited from the Bush Administration, dictated by a desire to oppose and embarrass the President at every turn, and determined to avoid talking about substantive foreign-policy problems. The irony, of course, is that we desperately need a “loyal opposition” to highlight and correct serious failures in Obama foreign policy. Which we’re not likely to get.

Some Good News from Pakistan