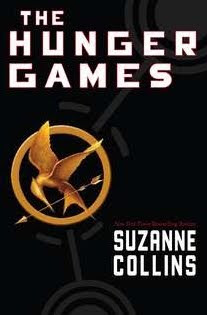 I finally finished the final book in The Hunger Games trilogy. (I was not expecting that ending, though in hindsight I’m not sure why.)

For those of you unfamiliar with the dystopian premise: the United States is gone. Its successor nation, Panem, consists of an opulent, entertainment-obsessed capital somewhere in the Rockies and thirteen impoverished districts in which inhabitants farm, mine and manufacture. The Districts are kept in line partly through a Tribute system (developed after an uprising 70 years ago in which the thirteenth district was exterminated): every year a boy and girl are chosen by lottery to fight in an elaborate reality TV show for the entertainment of the Capitol. The winner and his or her family receive a life of ease; the losers die horrible deaths in the arena while all of Panem watches.

So far, not a terribly sophisticated plot, but that’s just the first few pages. What’s interesting are the industries surrounding the games: the audience can bet on the winner, there is a system for providing assistance to the favorites, an elaborate set of strategies for currying favor, and each contender works closely with a team of fixers whose professional success is based not only whether their tributes live or die but on how well they can serve the overall goal of entertaining the masses in order to uphold the fragile, fearsome stability of the system. And then there are relationships among the tributes themselves, who can form alliances and develop friendships even though only one of them will survive. And that’s before things turn “political.”

The books, which are currently being turned into mega-films by Liongate deal not just with survival under impossible conditions (for a taste, check out this fan-made video by an actress who hopes for a chance at the coveted role of Katniss). More profoundly, they are about repression and inequality, the socio-political-military-entertainment-industrial-consumer complexes that sustain them, and the continuum of resistance mechanisms by which people along a continuum of core to periphery inch toward revolution. (There’s a lot more to work with here than Collins develops in the books; I hope the screenwriters will make the most of these subtexts.)

The series is pitched as “young adult fiction” in the genre of the Twilight series, although why this is true – whereas Orson Scott Card’s novels, for example, are generally understood as adult fiction – somewhat escapes me (perhaps the sci-fi pedagogy experts on this blog can explain this). The Hunger Games seems far more sophisticated than Twilight (when my daughter was reading it this summer, the adjective she used to describe the book was “complicated.”) Like Card’s Treason, Wyrms, Ender or the Homecoming series’ the characters in The Hunger Games trilogy are young adults, of course, but they are facing very adult situations and more importantly, they are treated as adults by the adult characters and the author in every way that matters. The books are just as brutal (as Entertainment Weekly put it “let’s see the makers of the movie version try to get a PG-13 on this baby”) and – yes – just as complicated as anything cooked up by Card.

In fact, one of the most interesting themes in The Hunger Games is captured pretty well by one of my favorite quotes from Card:

“Sometimes it’s impossible to wear an identity without becoming what you pretend to be.”

Or rather, if you wear too many contradictory identities for too long, it’s very hard to know who you actually are or what you prefer. So Suzanne Collins’ novels are at their root a commentary on the ways in which our subjectivity is mediated by the performances in which we participate – which are constituted by various types of media – to the extent that our various identities are de-stablized by the act of pretending, until ultimately distinguishing the real from the unreal becomes an exercise in blind trust among those we choose as companions. In such contexts, the meaning of political agency shifts significantly and reasserts itself in surprising ways.

The Ugly Underside of the Repeal of Don’t Ask, Don’t Tell