How Political Negotiations can be Un-Mediated but Mediatized 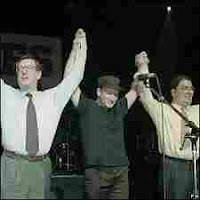 When delicate political negotiations are needed, perhaps journalists need to get out of the way. Gadi Wolfsfeld’s studies of peace processes have shown how journalistic discretion in Northern Ireland created space for political leaders to make individual compromises. Such compromises would probably each have been unacceptable to their constituencies if lit up by a media spotlight, but only became public once the full package of a peace treaty was reached (Bono had to wait). Past negotiations between Israeli leaders with their Jordanian or Palestinian counterparts have been less successful in part because journalists in the region have tended more towards the sensationalist and the partisan.

At the LSE tonight, Nick Anstead presented an analysis of media coverage of the 2010 UK General Elections, particularly the period between 7 May and 12 May when the three major parties were involved in behind-the-scenes negotiations to form a government, following inconclusive results. This was another instance in which journalists were denied access. Nevertheless, this occurred in a mediatized political environment, i.e. one in which media logics determine how processes work more than political logics. Following a political logic – principally, how the UK constitutional system works – if no party failed to produce a governing majority, then no party ‘won’, and a range of outcomes became possible. However, the prevailing media logic in the UK media ecology was that any election needs a winner. Further, in an ecology in which politics has been presidentialised, the winner has to be an individual: in this case David Cameron must be Prime Minister. That the office holder, Gordon Brown, was constitutionally entitled to remain in office until a governing coalition could be formed escaped many journalists. That the Labour Party could possibly be part of a new coalition government was almost as tricky to grasp, for hadn’t Labour’s man lost? Anstead illustrated these media meltdowns with some amusingly flustered questions from reporters of various TV channels.
Conceptually, this process was un-mediated but very mediatized. It was un-mediated because media could not provide a channel between the negotiations and the public, since reporters were barred from the political negotiations. But the event as a whole was mediatized, Anstead argues, because the range of potential outcomes was constrained by what the media system could find intelligible. As discussant, I was granted the chance to add a further point: it was surprising that UK political reporters were caught off guard to such an extent, given the close nature of the polls. Surely they should have provided a guide to how the constitution works and mapped the various permutations of possible coalition governments? Central to a mediatized system is premediation, the logic of mapping all likely scenarios for audiences before events happen, even if they never happen (Richard Grusin’s idea). Journalists form cultures marked by fallible expectations: in 2001 no US journalists saw another attack on the WTC coming, and in 2010 UK journalists had reached a consensus that Cameron would win outright. In each case, reporters were at a loss. The broader point is that the coalition negotiations were not as mediatized as they could have been: public responses to the various possible coalitions could have been solicited and the confusion minimised.

But what Anstead’s paper seems to suggest is this: Even if journalists are excluded from an event, the media ecology inhabited by political leaders, reporters and publics will shape what is thought possible, intelligible and legitimate, whether in domestic or international politics – an indirect but inescapable effect. Political processes can be un-mediated yet mediatized. He will present a more developed draft of his paper at the PSA Annual Convention in London in April, but if you are interested in receiving a copy please email N.M.Anstead@lse.ac.uk

The Promise and Perils of Book TitlesBecause I’m Way Too Busy With the Start of the Term to Blog About Anything Useful.