2011-01-29 / Vikash Yadav / 0 Comments
When I taught for three years at the American University in Cairo, my partner, who was conducting her doctoral dissertation research on Islamist political parties, would often get text messages from the Muslim Brotherhood informing us of interesting programs we might want to watch on satellite that evening or educational events around town. While I found the messages from the “banned-but-tolerated” party amusing (and useful), I was always dimly aware that the state must also be monitoring such messages. In one of my political economy classes I remember my students talking about one of their colleagues whom they suspected was being paid by the state to take notes in another lecture class. (When I asked whether they thought anyone was spying on my classes, my students all said IPE is just not that important to the regime). I think back to those stories whenever I hear people talking about the groundbreaking role of new media in organizing protests in authoritarian regimes.

While the January 25th revolution was partially organized through Facebook, activists are certainly not restricted to these new social media networks…. and make no doubt about it, this was a well organized revolution.  The Atlantic has translated pamphlets distributed to protesters on how to organize and behave. 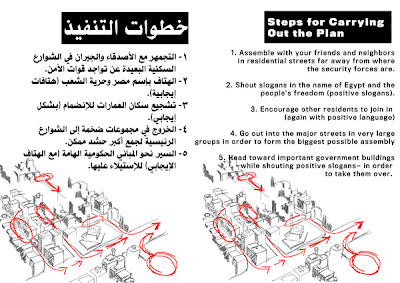 What one notes in this pamphlet is the advice not to use Twitter or Facebook because they are monitored by the state. These pamphlets were distributed the “old” fashioned way: photocopies given out by hand.

This is not to say that new social networking sites are irrelevant. What I mainly noticed in the days leading up to the start of the protests was that many of my friends in Egypt who are on Facebook began openly posting anti-government status updates. It was surprising to me because many of them are elites or at least members of upper middle class.  In essence, one might hypothesize that the role of new social media networks is to help rally or tap into anti-government sentiment which is often not voiced loudly in public, but the actual organization and dissemination of strategy and tactics still occurs off-line.

Willow Witching Pt. 2: What Washington should do….