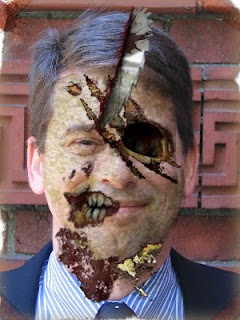 Adam Weinsten has written a delicious appraisal of my friend Dan’s newest book, Theory of International Politics and Zombies. I think he’s mostly spot-on, particularly his genealogy of Dan’s position in the discipline and his implication that TIPZ represents Dan having the last laugh on the Chicago Department of Political Science and its stale, antiquated notions of what matters in statecraft:

This is the university that gave us supply-side economics, Straussian neconservativism, and David Brooks. It is, in short, a haven for very smart people who live to confound undergraduates, worship Thucydides, and subvert the global order. Small wonder that Chicago hardly knew what to do with Dan Drezner, a (relatively) young right-of-center political economist with a penchant for pro sports and stream-of-consciousness intellectualism. In 2002, he started blogging about “foreign policy, economic policy, public intellectuals, pop culture.” In 2005, Chicago passed him over for tenure.

Fortunately for us (and, I suppose, for all those Chicago-trained libertarian economists), Drezner’s done very well in the marketplace of ideas beyond Hyde Park. He scored an appointment at Tufts’ Fletcher School of Law and Diplomacy; gained admission to the Council on Foreign Relations; and went pro in the blogging business, taking his daily insights to the website of Foreign Policy magazine. Along the way, something amazing’s happened: Open debates about global affairs have flourished… Whatever the reasons, academics and think-tankers are joining ever more laypeople in frank, smart, and often levity-laced discussions of world events… A light, breezy volume, TIPZ is a valuable primer in international relations theory for laypeople, and thank God for that—it’s been a long time coming.

Indeed! However, based on my reading of TIPZ, I must take issue with this statement:

But Drezner’s real genius is that he’s written a stinging postmodern critique of IR theorists themselves… It’s both a pedagogical text and a lampoon of pedagogy.

A stinging critique I’ll grant: the book can and must be read as parody. But a postmodern critique? This is an extraordinary claim given that the book actually scarcely mentions critical theory, post-modernism, feminist theory or pretty much any scholarship falling on the “reflectivist” side of the discipline, much less utilizes their tools. (Though to be fair, Dan doesn’t claim to do so, either.)

But if I have one critique of this otherwise brilliant little book, it’s that as
a description of “the field” of IR, TIPZ’ relentless focus on rationalist theory to the near-exclusion of identities, language or embodiment frankly bites. (Hey, critical theorists deserve to be made fun of too!)Even Weinstein (who apparently desperately needs a Drezner-esque treatment of postmodernism to even know what it is) notes that Dan gives “short shrift” to theories he doesn’t like, and is “pretty unfair to social constructivism.”

Feminist IR? Forget it. Despite the fact that zombie metaphors are providing inroads to regendering entire literary genres and the martial myths that support them, feminist theory only gets one footnote… oh wait, no, Dan earnestly informs me by instant message there are actually two whole feminist IR footnotes! One (p. 17) reads:

“Space constraints prevent a fuller discussion of how some theories – such as Marxism and feminism – would cope with flesh-eating ghouls… to be blunt, this project is explicitly pro-human, whereas Marxists and feminists would likely sympathize more with the zombies…”

“It is possible that a feminist perspective might provide some leverage at this juncture: in Zack Snyder’s remake of Dawn of the Dead (2004), for example, the contrast between the governance structure of the mall when the security guards are in charge and when the female lead (a nurse) and her compatriots are in charge is quite stark.”

Because we know security guards are always men. Nice try, my friend! For another take on gender and zombies see here.

Post-modernism? Post-colonialism? Not to be found in TPIZ’ therefore
easy-to-read pages. (Though “post-apocalypse” and “post-human” get a few index references.) Come on Dan, how am I supposed to even teach postmodernism now without the zombie chapter to go along with my Derrida and Sylvester?

Maybe this is what Weinstein means when he writes:

Drezner’s given you a paint-by-numbers template for your term papers or theses. If you attend U Chicago, anyway.

So what would an actual post-modern critique of IR look like? I’m not sure I’m braaaaiiinny enough to offer one here, but perhaps Weinstein is on the right track in his reinterpretation of neoconservatism:

Sure, sure: Neocon hawks will launch a preventive strike against latent zombie threats, and they’ll probably use it as an excuse to reinvade Iraq. But did it never occur to Drezner that the Manichean, all-or-nothing, bomb-it-yesterday neocons are themselves the zombies? Isn’t it possible that they—and the Islamophobic, messianic, war-happy Palinocrats that have kept neoconservatism on the pantry shelf long past its spoilage date—are the real undead automatons who march forth with no understanding of their actions?

More on Zombies and Drezner