Getting Slizzerd with the Red Cross: Disasters and/in Social Networking

This is not my usual forte – Charli is much better on NGOs, networks and social things. (I just like tweeting.) However, last night when I checked my twitter, a fairly odd message came up from the American Red Cross:

Slightly different from their usual “please donate blood” or “how are you preparing for the blizzard?” kind of emails.

Within an hour, the tweet was withdrawn and replaced with this: 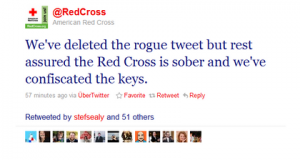 Colour me impressed. A 130 year old humanitarian agency with a sense of humour.

However, I’m drawing attention to the story because yesterday was also the day the ARC released research it has done (in infographic form!) as to how social networking might be used in an emergency. 28% of respondents noted that they would use social networking to let people know they were safe.

It might sound laughable, but after having gone through 7/7 and 21/7 – when mobile networks were completely down, I had to rely on email to find out what had happened to friends and family. I have to say that I would certainly have used facebook and twitter in that situation. And I would have preferred to follow the situation on twitter rather than waiting for press conferences. (Although that just might be me.) So the question is should humanitarian organizations do the same? Should they both gather information from social networks and disseminate it this way as well?

I’m not entirely sure what the risks are – is it that getting a clear picture would be difficult? How to tell the real tweets from the fake ones? What about people (like my parents) who don’t know what a “twitter” is? Would they be disadvantaged by such a turn? Without much background on the subject, I’m going to work with the idea that for now the use of social networking in disasters/crises would be best understood as complementary rather than replacing other services.

However, the infographic provides a really interesting collection of facts and figures related to how social networking has been used in the past and gives us an indication as to how it might be used in the future, other than the promotion of #gettngslizzerd. It also notes the number of emergency response organizations that have twitter accounts.

As for the unfortunate tweet, the Red Cross has given its side of the story here – noting that its members are only human. This is true; however I would add that after working with them recently on a project, they are some really good humans who do an impressive array of work.