The Shifting Civil-Military Balance in Egypt 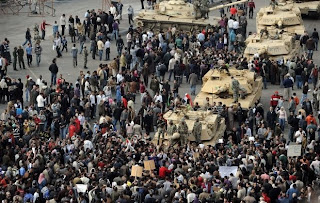 President Obama expressed a general sense of relief tonight that the Egyptian military chose to side with the people over the state this week – an outcome not at all pre-ordained by the pre-existing historical relationship between the Egyptian military and the govenrment. In 2004, for example, Stephen Cook concluded the Egypt case study in a Council on Foreign Relations report on civil-military relations in the Middle East as follows:

The organic connection between the Egyptian armed forces and the existing political order is likely to place a drag on Egyptian reform and complicate US efforts to bolster change. With their influence institutionalized at the highest levels of the state, the
officers are likely to countenance reforms that merely shore up the existing regime, but do not effect in any way their highly influential role over the course of Egypt’s political development.

Ever since the Camp David peace accords between Egypt and Israel, promising Egyptian military officers have come to U.S. military schools, including the Army War College in Carlisle, Penn., the Army’s Command General Staff College at Fort Leavenworth, Kan., and the National Defense University in Washington, D.C. Inculcated there with U.S. ideals on lawful civilian control of military, such an education has helped act as a “safety” on the firepower of the Egyptian streets now massing in Cairo and in other cities.

“This new generation of Egyptian officers has been exposed to the American military and has had a very favorable impression of not just the way we fight our wars but also about the relationship between the military and society,” says Robert Scales, a retired Army major general who served as commandant of the Army War College where he launched the international fellows program. “One of the reasons for the army’s reluctance to follow Mubarak’s intent and squeeze the population in Cairo has to do with the Egyptian military’s exposure to the U.S. military.”

Now, I hope that someone following civil-mil in Egypt more closely than I have will weigh in on the veracity of this analysis. But if this is indeed even a significant element of the basic story, then it confirms an argument by Carol Atkinson on the liberalizing effect of military-to-military relations globally:

The research presented in this article examines one aspect of state socialization, the extent to which transnational military-to-military interactions have served as an effective mechanism of the democratic political socialization of states. The socialization process described in this study is three level: (1) individuals acquire new ideas; (2) coercion, incentives, and persuasion aid in institutionalizing these ideas in the underlying political structure of the state; and (3) once institutionalized, these new ideas/identity of the state influence the material and ideational structure of international society. Using an original data set encompassing over 160 states during the years 1972–2000, the analyses find U.S. military-to-military contacts to be positively and systematically associated with liberalizing trends.

The standard foreign office response in a time of crisis…