Global Governance and the Worst Case Scenario: Theorizing the International Relations of a Zombie Holocaust 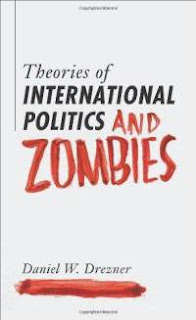 Stephanie Carvin created, animated, moderated, and even presented on the roundtable. Other participants included Robert Farley (of LGM), Jeremy Youde, myself, Charli Carpenter, and, of course, Dan D. Topics included:

For those of you who missed the panel, we now have a podcast available. Recording quality is uneven — Rob, despite being roughly the size of a hill giant, has trouble switching his voice to any setting other than “mellow.” Charli’s presentation simply isn’t the same without the mashed-up film she played in the background. I did not include Q&A, because I lack permission from the audience to broadcast their comments. But despite these failings, the podcast is well worth your time.

“Manning Up” and Making (the Libyan) War