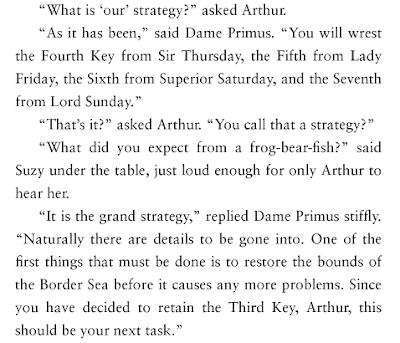 I’m tired of demands for an articulated “Obama Doctrine.”

Don’t misunderstand me. I think it would be nice if the Obama Administration had an overarching vision for US foreign policy. It might even be a good thing if it could produce something resembling a coherent document on the subject instead of the stream-of-consciousness bureaucratic filler it tends to publish.

What I emphatically reject is the idea that Obama ought to, in effect, retcon Libya by articulating an ex post facto grand strategy that makes sense of his decision to intervene.

Why did we intervene in Libya? For a number of reasons, many of which aren’t usually found in sweeping foreign-policy visions. Yes, NATO gets to assist a beleaguered popular uprising and prevent a massacre of people quite publicly clamoring for international assistance. That kind of thing makes liberal hawks get all starry eyed. But what makes Libya different than most of the other places where tyrannical governments do nasty things to their citizens isn’t terribly Wilsonsian:

I might be wrong, but I don’t consider the “Humanitarian-intervention-against-militarily-weak-fossil-fuel-producing-countries-in-strategically-important-regions-that-are-also-located-near-many-large-NATO-military-bases-and-are-run-by-dictators-who-kind-of-piss-us-off-and-have-no-powerful-allies Doctrine” the stuff of Grand Strategy. But if you read between the lines, that’s pretty much the gist of what Obama had to say tonight.

Now, I’m sympathetic to the argument that capital-D Doctrines are all about legitimation. James Poulos, for example, argues that Obama needed to provide a grand-strategic vision in order to justify the Libya air campaign to the American public. Some time ago PTJ explained that:

Instead, a doctrine is a rhetorical commonplace, a widely-shared and vague notion on which speakers can draw when attempting to justify courses of action. A foreign-policy doctrine doesn’t tell you what to do as much as it makes particular courses of action possible — and makes others more difficult, if not impossible.

But, as far as I’m concerned, that’s precisely the problem. Doctrines profoundly shape the contours of foreign-policy debates. Even within the US government, policymakers deploy the content of high-level speeches as warrants for the policies that they advocate. This means that the last thing we want from our leaders is the development of general principles around specific cases.

Besides, the details often matter more than anything else.

Morality, R2P, the nature of conflict and the emerging “Obama Doctrine”

Theses on Consistency and Intervention