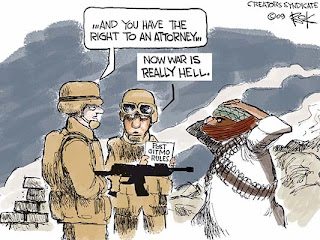 In my Friday post I forgot to give a shout out to Ben Wittes and the Lawfare Blog who have been writing about this since last fall. In particular, they had an excellent series of posts on the concept (but way of a discussion of the Rule of Law in by Brigadier General Mark Martins (in Centcom and apparently in Afghanistan) on the concept here, here and especially here. (He offers his own interpretation of “lawfare as COIN”). It’s a very interesting discussion and highly relevant for those interested in these issues. (Although late to the party, I do mean to write my own response to this – although he lawfare blog has that too.)

However, I’m here because my mortal enemy Charli Carpenter has an excellent post in an ongoing discussion of lawfare. Rather than more speculating over the meaning of “lawfare”, she resorted to asymmetric tactics and just went and asked Charles Dunlap, originator of the term. (While I’m inclined to believe that this was a distinctly unfair advantage, unlike war, all is fair in love and blogging.)

Now, since it just so happens that I’m sitting next to Charlie Dunlap at this bombing workshop, so I’ve had time to ask him directly about where he sits in all this and what he meant by the term. He tells me he agrees that the term has generally been misused and over-conflated. But his own understanding of lawfare is a little broader than the one I’ve put forward at the Duck, though significantly narrower than Stephanie’s or Eric Posner’s. In short whereas I read Stephanie as arguing that “lawfare” should refer to all efforts to hold states’ accountable to the law, Dunlap refers to the ways in which law is used as a weapon in war by belligerents.
However I was wrong in thinking that he primarily refers to the near-perfidious use of the law by insurgents who, for example, are known to surround themselves with civilians simply because they know it makes ISAF troops less likely to target them. Dunlap also considers it “lawfare” when law-abiding states use their own adherence to the law to their own advantage – when ISAF, for example, advertises its civilian protection policies to win hearts and minds. So it’s a belligerent-focused concept, not necessarily one that focuses only on perversions of the law. This is quite distinct however, from the argument that “lawfare” is being waged by non-belligerents (NGO advocates and such) by definition when they call states to question for violating war law.

If you have any interest at all in this topic, I highly suggest that you read it.

In my defence, I just want to make clear that my points in my original post were:

So I don’t/didn’t think lawfare should just refer to all efforts to hold states’ accountable. I definitely do not agree with Posner’s position. It’s not just academics criticizing states to score political points, but it’s also states using the law to score their political points. I basically saw it as a point scoring exercise by everyone.

But I would concede that this is, perhaps too large of a definition.

Dunlap’s comments on his use of the term – as a way to get states to take IHL seriously (which until the mid-1980s was taking a bit of a beating in the wake of Vietnam) – meshes pretty well with my research on attempts of US military lawyers to do just that.

So, given the above discussions and further thought, I guess I will forward my own modified, particular, super basic and no-doubt flawed interpretation of lawfare as “the use of law as a tool as relates to the conduct of military operations”. This would be the use of law to achieve an aim, whether it is to sharpen the sword, blunt it (or just getting your superiors to take you seriously.)

How’s that? (Seriously – I’ve really enjoyed the feedback on this.) Unfortunately, I don’t have Dunlap to ask – but, um, my Dad thought that sounded good. So there!

Music with a conscience from Ivory Coast